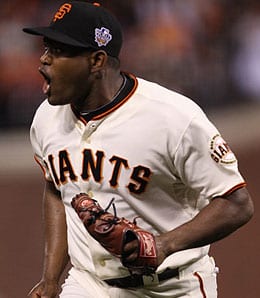 Homers and blisters have been Santiago Casilla’s undoing.

But you couldn’t argue with the early returns.

Then began his struggles.

While Casilla did earn saves in seven of eight chances in May, he did so in a very shaky manner (7.71 ERA). Shortly thereafter, Casilla’s blister injury thrust Romo into the closer role.

Casilla returned a week and change later, but continued to get shelled and wound up blowing five of his final nine save chances before Bochy opted to go the closer-by-committee route, employing Romo, Jeremy Affeldt, Casilla and Javier Lopez. Meanwhile, Casilla’s blister issues have returned, crappy timing considering he had been looking sharp in August so far.

Casilla was absolutely lights out in a setup role in 2010 and 2011, but he can’t seem to stop servering up dingers this year. After giving up a combined three homers in 107 IP over the last two years, he’s been burned for seven long balls in just 40 innings this year (most recently serving up a go-ahead homer in extra innings in a July 30 loss). Ugh.

Obviously, that’s leading to a crapload more earned runs and he’s already over doubled his previous high for losses in a season. Ugh.

We would say there’s a good reason why Casilla is starting to wind up on the wire in several leagues.

Casilla’s command has been excellent — he’s striking out batters at a higher rate than ever, and he’s substantially cut his walk rate from last year. The issue is the crazy high HR/FB rate – way above anything we’ve ever seen out of him.

Casilla still has the stuff to close, but he’s had some awful luck this year; don’t completely give up on him yet. He has the ability to regain control of the job, so if you have room to stash him on your bench while you see how this plays out over the next couple of weeks, it might not be a bad idea.

By RotoRob
This entry was posted on Thursday, August 9th, 2012 at 12:21 pm and is filed under BASEBALL, RotoRob. You can follow any responses to this entry through the RSS 2.0 feed. You can leave a response, or trackback from your own site.