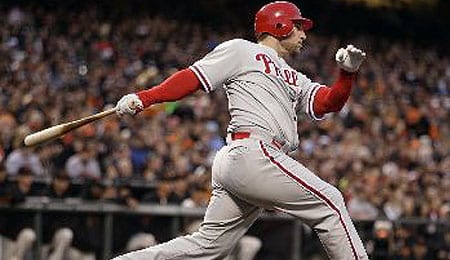 Laynce Nix could have helped the Phillies had he been healthy.

How badly have the Phillies missed Ryan Howard this season? Well, consider that the group filling in for RyHo – which has included Ty Wigginton, John Mayberry, Jr., Hector Luna, Laynce Nix and the recently traded Jim Thome – have combined for a slash line of .253/.314/.405 with 11 homers and 41 RBI in 331 plate appearances.

We don’t need to tell you how substandard a performance that is from a position teams expect to produce plenty of bop.

Small wonder the five-time defending NL East Champion Phillies have sunk to the bottom of the division, and just keep on sinking.

The unfortunate part for Nix is that he was enjoying a career year and was starting to get more and more PT before hurting his calf a couple of months ago. We expected Nix to be the 130th best outfielder in Fantasy baseball, but because of his downtime, he’s barely been a top 150 flyhawk.

After a setback a couple of weeks ago, Nix is reportedly going to begin a rehab assignment soon – just in time for Howard to finally make it back to the Phils, thereby shooting down Nix’s chance to secure more Fantasy value.

One of the team’s key free agent signings last winter after hitting a career-high 16 homers for Washington in 2011, Nix was batting a robust .326 before going down. Now, considering he’s a lifetime .247 hitter, that BA was probably unsustainable, but he was putting himself on the Fantasy radar before getting hurt. And, yes, the Phils needed his offensive contributions badly. They still do.

By RotoRob
This entry was posted on Wednesday, July 4th, 2012 at 11:13 am and is filed under BASEBALL, MLB Today, RotoRob. You can follow any responses to this entry through the RSS 2.0 feed. Responses are currently closed, but you can trackback from your own site.