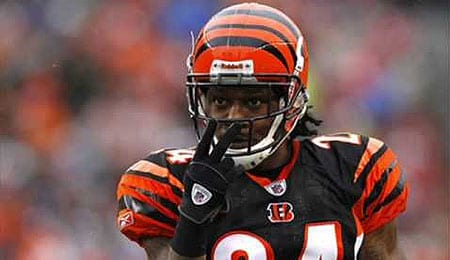 Pacman Jones will teach rookies what not to do.

We guess this is the NFL’s version of the Scared Straight program, where young offenders get a glimpse into what their lives will become as hardened criminals and subsequently turn their backs on crime.

In this version, the NFL has asked Adam “Pacman” Jones to be part of a panel discussion at the league’s rookie symposium held at the end of the month.

Really? You’re asking the man famous for ‘making it rain’ to Shepard the future of the league?

We assume the theme of Jones’ particular talk will be ‘do as I say, not as I do.’

Seriously, this dude is the poster boy of how legal troubles can derail a promising career.

The sixth overall pick in 2005, Jones was suspended for the entire 2007 season for his role in a Las Vegas strip club shooting. Beyond the NFL’s sanction, he was sentenced to one year of probation.

Tennessee had seen enough and dealt him to the Cowboys prior to the 2008 draft. Then came suspension No. 2 as an alcohol-related tiff with a bodyguard that the Cowboys had provided earned Jones another six games on the sidelines.

Jones could face a third suspension from the NFL after pleading guilty in January to misdemeanour disorderly conduct.

And in a couple of weeks, Jones will be sharing his wisdom with the newest crop of NFL rookies.

Meanwhile, Ed Reed was a no-show for Baltimore’s first day of mandatory minicamps. The Ravens don’t have a clue why Reed was AWOL. Reed has talked about retirement several times and doesn’t seem pleased with his current contract, but according to Ray Lewis, Reed is dealing with a family issue and will report to camp in late-July. Why he couldn’t have contacted the club and told them that is anyone’s guess. Factor in the ongoing Terrell Suggs saga and it’s been a rough and contentious offseason for the Ravens so far.

Reed isn’t the only star missing as teams open minicamps. Kansas City’s Dwayne Bowe is not as the Chiefs’ camp, but given that he has not yet signed his franchise tender, he’s technically not under contract. And that means he’s exempt from the final series of workouts before training camp kicks off next month. But Bowe’s absence could make it difficult for him to be fully prepared once the season begins.

And the biggest absence of all is Maurice Jones-Drew at the Jags’ camp. With MJD, it’s all about the contract. He’s coming off his best season and wants to be paid like one of the best running backs in the league, but the team has no plans to renegotiate his deal. This one could get ugly, folks. We already posted early reactions to this news at Storify.

By RotoRob
Tags: Adam Pacman Jones
This entry was posted on Wednesday, June 13th, 2012 at 12:55 pm and is filed under FOOTBALL, Pigskin Points, RotoRob. You can follow any responses to this entry through the RSS 2.0 feed. Both comments and pings are currently closed.