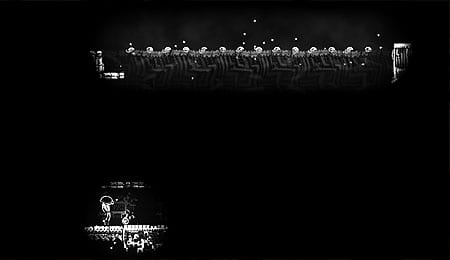 Closure’s art style is as unique as its light-based gameplay.

Puzzle games have existed in many forms since the dawn of the video game industry, but this generation’s set has focused on breaking the laws of physics — Portal, Braid, and Echochrome have all found success by taking the usual perspective and literally changing how people think. Playstation Network exclusive Closure is the latest entry in this genre. Braid dealt with time, Echochrome dealt with perspective, Portal dealt with, um, portals; Closure looks at how light plays into puzzle solving.

Most 2D puzzle-platformers have pretty standard controls, and Closure is no different. Movement uses the directional pad, not the analog stick. The square button is a general interaction button: pick up or drop stuff, interact with the environment and manipulate objects. The triangle button opens the door that ends each level, so you’ll be itching to figure out how you actually get to the point where you can hit that darn triangle button.

Closure does have platform elements, as you’ll be moving from lit area to lit area. Thus, you’ll jumping around a bit, and the “X” button handles the jumping. Most of Closure’s movement is crisp and appropriate, but the jumping is a little floaty at times. Because you can only move on to areas lit by spotlights or other devices, accurate jumping is important and you might find yourself floating into oblivion a little more than you’d like.

Closure’s distinct art style looks like ink art come to live. Striking black-and-white visuals create a unique look. Of course, you don’t see too much of this at once since only a part of the screen is visible at any given time. Everything bleeds a feeling of despair, though there’s no strong narrative to tie all of this together. The main character looks like Samus Aran as visualized by Tim Burton, and while you never really establish an emotional connection, there’s no doubt that the game looks like an animated work of art.

In contrast, the music is dour but not stark. It’s fitting but not particularly memorable in any way; it could be cut-and-pasted into the loading menu of any gritty sci-fi game. It might have been interesting if the developers went with the Survival Horror method of silence to accompany the game.

Similar to Echochrome, the goal of Closure is to manipulate your perspective and surroundings to get to the exit. And similar to Braid, this is done in a way that breaks the laws of perception to solve puzzles on a 2D platform. Saying that you want to get from A to B is easy, but Closure’s puzzles are unique in that the only tangible places your character can go have to be lit. That means that you either have to place a glowing ball in certain areas, light a lamp, or tilt a light at an appropriate angle — and if there’s an object in the light’s way, you can bet that it will block out the illumination.

That’s the starting point. Then you add in the environment — jumping, climbing, swimming. Keys, boulders, and blocks are susceptible to these rules to you, so if you’ve picked up and placed a key in a certain place, make sure that area stays lit. Otherwise, the key will tumble into the ether and you’ll have to start over again.

Sometimes, you’ll use these elements to your advantage. For example, if you need to transfer a block down to a lower area, simply eliminating the light around it will cause the block to fall. This technique can be employed to trigger buttons, move key elements, or enable boulders to roll down the path.

As expected, the puzzles vary in complexity throughout Closure’s 70 or so levels, but they do gradually ramp up in difficulty. For the avid puzzle game fan, this will be heaven, as the game’s moody artwork and atmosphere provide a truly unique experience. For casual gamers, Closure provides an addicting pick-up-and-play scenario, though without a narrative to tie it all together, it’s simply puzzle after puzzle. This isn’t necessarily a bad thing, but it’s important to know that what you see is what you get.

Even though it’s an independent release, Closure has garnered enough hype and curiosity for Sony to give it a lot of exposure on the Playstation Store. Its combination of head-scratching play (where frustration often gives way to a brilliant a-ha moment) and distinct art style make it among the class of independent releases, and even non-genre fans should check it out if they want an experience that doesn’t involve saving the world from invading aliens, giant dragons, or dudes with machine guns.

Through the first four seasons of the five-year, $90-million deal Hunter signed to join the Angels, he’s accumulated a WAR of 12.5 which compares favourably to the 11.3 he totaled over his final four seasons in Minnesota.

By RotoRob
Posted in BASEBALL, MLB Today, RotoRob | Comments Off on MLB Today: Torii Hunter Will Get More Rest

The 2012 season is underway (sort of), and with it comes a whole new set of discussions. In this week’s episode of RotoRob’s Fantasy Baseball Weekly, both RotoRob and Tim M. were out of action — not to worry, it was for sports reasons in both cases — so Buck brought out some guests in the form of KFFL.com managing editor Tim Heaney and RotoExperts’ executive editor Doug Anderson.

He made his big league debut last year, looking absolutely superb in seven starts and 35 IP. Delgado actually improved his homer rate from Triple-A, and remains in competition for the fifth starter in Atlanta this season. He had a decent record in Double-A, but his strand rate at Triple-A was higher. Delgado has superb mound presence and features a low-90s fastball, a tremendous changeup, and a fine curveball. He could top out as a No. 2 starter in time.

Give Sony San Diego credit; it just keeps offering new ways for you to play the game. The most notable addition this year is pulse pitching, which has you place a pulsating circle where you want your pitch to go and then try to release when the circle is at its smallest (the smaller the circle the more accurate the pitch). It works fairly well, varying in speed and size based on a number of factors, and makes it more difficult to locate pitches with precision. It’s more realistic in that regard than the traditional meter that practically lets you live on the black, though it does lack the option to determine velocity.