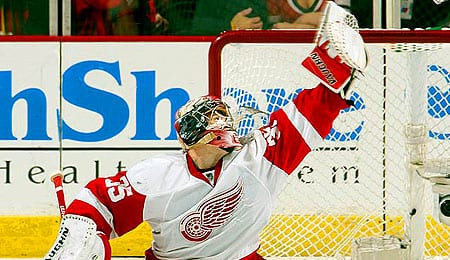 Jimmy Howard could shatter the NHL record for wins by a goalie this season.

Sidney Crosby, who has been making the rounds to various medical specialists the past couple of weeks as he tries to recover from yet another concussion, may be dealing with more than what we all thought, it was revealed during All-Star weekend.

The timing of the report about newly discovered – but apparently already healed broken neck vertebrae – couldn’t have been worse, as the NHL was celebrating its best and brightest when its absolute best and brightest was dealing with a new complication in his one-year battle to return to full health.

Results from the MRI and CTI tests Crosby underwent recently could be released Monday, and hopefully based on that information, we’ll have a clearer idea of what he’s dealing with and when he might return to action.

No. 87 has been skating for a while, so that’s good news, however, it’s unknown whether he’ll skate again on Monday. Crosby did make it back for eight games earlier this season before having to shut it down again. It’s been a frustrating process, especially with the lack of many concrete reports. But that’s part of the drill given the uncertain nature of concussions. And now we find out that many of his symptoms may have come from broken bones in his upper spine/neck area that either somehow were never detected or simply never reported until now. WTF?

With both Crosby and Alex Ovechkin missing the All-Star Game, the NHL sure was missing a lot of star power, wasn’t it?

The Detroit Red Wings enter the unofficial second half just three wins shy of tying the NHL record for consecutive home wins, however they won’t get a chance to go for that mark until after a four-game road trip starting Tuesday in Calgary.

One of the biggest reasons for the Wings’ success this season has been the play of goaltender Jimmy Howard. We have to give him some props, as he’s been much better than we anticipated. In fact, heading into the season, we didn’t even include Howard among the top 15 goalies, but other than Henrik Ludqvist and Jonathan Quick, there have been no better goalies in the NHL so far in 2011-12.

Of course, Howard didn’t look so sharp in Detroit’s final game before the break, giving up four goals on 12 shots before getting yanked, but overall he sure has bounced back from a tepid effort last season. Howard already has 30 wins – just think about that for a moment. It’s not even February yet! To put that in perspective, Martin Brodeur set the league record with 48 wins in 2006-07, but Howard is on pace to 59 games this season. Seriously? No goalie has ever won 50, and this dude is poised to Gretzky the league mark. It’ll be fun to watch how this plays out in the second half as Detroit tries to hang onto the NHL’s best record.

The rest of Howard’s numbers are also easy on the eyes. He’s putting up his lowest GAA yet and he’s already shattered his personal best with five goose eggs to go along with a sweet .924 save percentage.

The Montreal Canadiens closed the first half with a huge win over Detroit for their second straight victory. They went into the break hot (5-3-2 over their last 10 games), yet still sit eight points behind the Devils (who have a game in hand) for the final playoff spot in the East. With Winnipeg and Toronto also between them and a playoff spot and the Lightning breathing down its back, the Canadiens are going to be extremely hard pressed to not miss the playoffs for the first time since 2006-07.

Fortunately for the Habs, their first game after the break is at home against the lowly Sabres, who have struggled so badly on the road this season. Then Montreal gets to visit New Jersey and go right after the team it’s chasing for a playoff spot. By this weekend, we should know if the Canadiens have a hope in hell or if it they be sellers at the deadline.

New Montreal coach Randy Cunneyworth – ya, the Anglophone dude – got off to a rough start as the Canadiens went 3-8-0 in their first 11 games under him while he was only able to explain why they sucked so bad in one language. Since then, Montreal is 3-1-2 with wins over the Rangers, Toronto and Detroit – an impressive little run heading into the break.

Now let’s see if that roll can keep going or if this team will experience one of the rarest events in franchise history – a playoff-free spring.

By RotoRob
This entry was posted on Monday, January 30th, 2012 at 12:25 pm and is filed under HOCKEY, NHL Today, RotoRob. You can follow any responses to this entry through the RSS 2.0 feed. You can leave a response, or trackback from your own site.