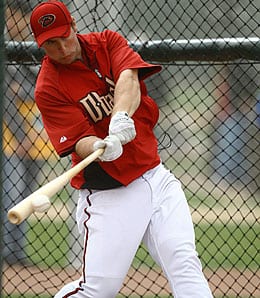 Don’t sleep on Paul Goldschmidt at your draft next year.

As you may recall, just over a week ago, we predicted that the Arizona Diamondbacks wouldn’t just be satisfied to make the playoffs and that they posed a legitimate threat to the Milwaukee Brewers.

Well, sure enough, the Snakes took the series to the limit, and even led 1-0 after three innings before the Brewers forced extra innings and eeked out a win in the bottom of the 10th to eliminate Arizona on Friday.

Even with the disappointment of falling short after coming so close to moving, the 2011 season was a resounding success for Arizona, definitely one of, if not the biggest surprise of the year.

Heading into 2012, the one Diamondback I will be keeping my eye on will be first baseman Paul Goldschmidt, who had an extremely impressive run as a rookie after being called up at the very beginning of August and is someone whose potential we discussed in greater detail in a late-August Podcast. The baseball world certainly got a sense of what he’s capable of in the NLDS as he led the D-Backs in hitting while pounding a pair of dingers, including a grand salami, in the five-game set.

What jumps out at you immediately about this kid is the power. He smacked eight homers and nine doubles in 156 at-bats in his first taste of the majors. That’s a pace that would put Goldschmidt over 30 homers for a full season. Okay, so his .250 BA didn’t exactly scream “stud” at a position that’s stacked with them. But when you factor in the poor strike zone judgment he showed (20 walks, 53 strikeouts in 48 games), there’s definitely room for improvement.

And if there’s one thing Goldschmidt has shown in his brief pro career, it’s the ability to make adjustments. Arizona’s eighth-round pick in 2009 made his pro debut at Rookie-level Missoula in 2009, flashing power (18 homers in 74 games) and BA (.334) despite poor strike zone judgment (36 walks, 74 strikeouts). Moved up to High-A last year, Goldschmidt again pounded the ball (35 homers in 138 games), but his even weaker batting eye (57 walks, 161 strikeouts) started to affect his BA, which was still solid, but 20 points lower at .314.

Heading into this season, Goldschmidt had arrived as one of the top 10 prospects at his position, and he certainly lived up to that billing, ending any questions about whether his 2010 performance was a fluke and whether the prodigious strikeout totals would be his undoing. At Double, his power developed even further (30 homers in 103 games), but it was his batting eye improvement that really impressed me (82 walks, 92 strikeouts).

I’m expecting Goldschmidt to improve his strike zone judgment in his first full season in Arizona, so while there’s still room for growth in his power game, there’s even more room for growth in his BA. I can see him putting up 30-to-35 homers with a .275 BA in 2012 – pretty damn solid numbers for a dude that will continue to fly under the radar on draft day.

The one caveat here: this dude is big. And I mean 12-cheeseburgers for dinner big (6’3″, 244). So he’s going to need to watch his waistline, especially since he just turned 24 last month. Clearly, there’s still room for growth in his weight, too. He’s got a larger frame than Prince Fielder is which to carry that weight, but in time Goldschmidt could be Prince Jr., which his owners won’t mind one bit as long as his numbers compare favourably to Fielder.

By RotoRob
This entry was posted on Monday, October 10th, 2011 at 10:46 am and is filed under BASEBALL, RotoRob, Scouting Report. You can follow any responses to this entry through the RSS 2.0 feed. You can leave a response, or trackback from your own site.