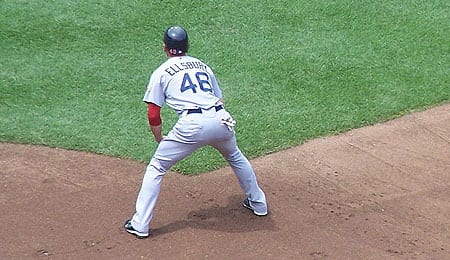 Jacoby Ellsbury, who has yet to miss a game this season, has been a major offensive instigator for the BoSox.

Carl Crawford took an 0-for-3 Sunday as he continues to fight to stay over the Mendoza Line and flounders in his first season with Boston.

His awful start has seen him relegated to the eighth spot in the Red Sox batting order for most of the season so far. But where should he hit? The now healthy Jacoby Ellsbury has been doing a brilliant job setting the table from the lead-off slot. Dustin Pedroia has been slumping at the two-hole, but are you going to move the former MVP from a slot that Crawford might be better suited for? I’m not sure Boston is ready to do that, although that might be the best play to integrate Crawford into the lineup.

This dude was given a whopping seven-year, $142-million contact; the Red Sox need to do everything they can to make it work because so far, Adrian Gonzalez — the team’s other huge off-season addition — has won far more fans in Red Sox Nation than Crawford has.

The Mets had gone 17-9 to get back to .500 before dropping the final two games in their subway series against the Yankees. I guess we can hold off on that fire sale… for a few weeks at least. Then again, owner Fred Wilpon is too busy taking pot shots at his own players to have the time to think about how to improve his team for the long haul.

Casey Kelly has looked really good at Double-A, but our pre-season No. 40 prospect got hammered in his last outing, so let’s not start the Kelly-to-Triple-A watch just yet. He’s already up to 50 1/3 IP after getting shut down at 95 IP last season, so it will be quite interesting to see just how many innings the Padres are willing to let their 21-year-old pitching prospect toss this season.

How locked in does David Ortiz look right now? He’s 8-for-18 with three doubles and two homers in the past four games and is definitely justifying the faith we showed in him when he ranked Big Papi as the top DH option prior to the season. The most promising number from Ortiz so far this season is 829 – his OPS against left-handed pitching after scuffling to a 599 mark last year.

Back in the outfield, the Red Sox faithful continue to wait out the J.D. Drew contract, which mercifully expires after this season. He hasn’t played since taking an 0-for-4 Saturday, which means he doesn’t have a hit since homering on Thursday, just his third dinger of the season. He’s batting just .200 in May and has been ridiculously unproductive all season. Remember that we are talking about a player that was given $70 million over five years but has yet to drive in even 70 runs in any one season with the BoSox. We thought Drew might be close to a top 60 outfielder this year, but he’s not even in the top 100 as he’s become useless in all but the deepest AL-only formats. Meanwhile, down at Triple-A, Josh Reddick keeps pounding home runs for Pawtucket as he awaits another shot in Boston.

Speaking of bloated contracts given to outfielders, Jayson Werth is starting to play a bit better after an ugly start for the Nationals. He’s now hit safely in seven of his last eight games, taking his May OPS up to 854. It’s still a far cry from what he did in Philadelphia, but it’s getting better. Overall, his counting stats are way down and so is his extra-base power. In a promising sign, however, Werth was moved into the clean-up slot for the Nats last week and if this sticks, his RBI count should start to rise.

Alex Rodriguez sure seems to have woken up after an ugly start to the month. He went 4-for-5 Saturday and is now 13-for-27 in the last six games, taking his BA from .250 to .284. During this run, A-Rod has scored seven runs, pounded three homers, driven in four runs and added a double. Staying healthy is the key for A-Rod as he tries to bounce back from the worst full season of his career last year. So far, his troublesome hip hasn’t been a huge issue and if that continues, Rodriguez should post some fine numbers, a bit closer to his career norm.

Jose Reyes is enjoying a nice comeback season, and has slightly exceeded our expectations (we had him pegged as the third-best shortstop, but he’s probably been No. 2 so far), but let’s get real – he’s not going to get “Carl Crawford” money as Mr. Wilpon so honestly stated in the New Yorker article that has Mets’ fans wagging their tongues. Reyes has gone a bit cold lately, going hitless in three of his last four games after he had been on such a nice roll for most of May.

Last week Ian Kennedy has his worst start in over a month, yet he was hardly drilled (six hits and four runs in 7 2/3 IP) and he came away with his four straight win. His results have been steady and very solid, but I do worry about the increased workload. Last year, Kennedy pitched in a career high 194 IP, averaging 99.1 pitches per start. This season, he’s on pace to top 230 IP and is averaging 105.1 pitches per start. He’s thrown at least 110 pitches in each of his last three starts. I’d keep an eye on Kennedy’s velocity and command as the season progresses. Yes, he’s vastly exceeded most projections (we thought he’d be a top 50 starter, but he’s been in top 20 so far), however, if wear and tear begins to become a factor (he’s not a big boy, after all), think about selling high.

By RotoRob
This entry was posted on Monday, May 23rd, 2011 at 12:44 pm and is filed under BASEBALL, MLB Today, RotoRob. You can follow any responses to this entry through the RSS 2.0 feed. You can leave a response, or trackback from your own site.