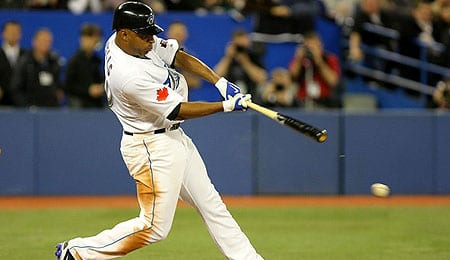 Vernon Wells’ first month with the Angels has been a nightmare.

So the Los Angeles Angels (or whatever the hell they’re calling themselves these days) have quickly found out why Toronto so desperately wanted to divest itself of Vernon Wells’ ridiculously bloated contract.

After 12 years in Toronto, he’s struggled horrifically during his first month in an Angel uniform, and although he’s delivered hits in three straight games (which constitutes a bonanza for him), Wells was instrumental in Wednesday’s loss when he nearly collided with Peter Bourjos and was unable to corral Cliff Pennington’s drive to open the 10th inning. Pennington wound up with a triple and was later cashed for what proved to be the winning run as the Halos failed to wrap up a sweep of Oakland.

We ranked Wells as the 30th-best outfielder heading into the season, but based on his ugly start, he’s not even a top 125 outfielder. In fact, we’d rather have Casper Wells than Vernon Wells right now. That’s just sad.

Wells’ walk rate has dipped to its lowest level since 2002 (his first season as a full-time player) and his strikeouts are way up. Speed’s never been a huge part of his game, but after matching his career high with 17 steals in 2009, Wells managed just six thefts last year and is 0-for-1 on the basepaths so far this year. Again, that’s as much a product of his inability to get on base as anything. When you’re almost never reaching base, the last thing you want to do is run into an out.

Manager Mike Scioscia thinks Wells is trying to swing too hard. Perhaps if the veteran outfielder tries to simplify things and just put the ball in play, he’ll start to work his way out of his funk. Patience has never been one of Wells’ bigger virtues, but after a career low 3.24 P/PA last season, he’s managed to sink even lower this year at 3.12.

Wouldn’t you want to try to take more pitches if things aren’t going well for you? Hey, when you’re in the zone, and every pitch looks like a beachball, feel free to whack away. But when the pitches look like peas, we’d try a less aggressive approach.

What the Angels really need to do is figure out how to play more games in Texas. Wells, who grew up in the Lone Star State, has always raked in visits to Arlington, and this season is no exception. In fact, not only did he hit safely in all three games in Texas a couple of weeks ago, but he had back-to-back multi-hit games – pretty impressive considering he’s only had more than one hit in a game three times all season.

Maybe Wells is just freaked out because of the stalker he had this spring. Apparently, she wasn’t exactly easy of the eyes.

This dude makes more money (US$23 million this season) than anyone on the Angels, but he has yet to provide them with much of a return on their investment. From a Fantasy perspective, the three-time All-Star has begun to show up on the waiver wire in shallow and, in some cases, standard-sized mixed leagues.

Let’s look at the bright side. Through the first 10 games of the season, Wells was only hitting .091. Since then, he’s been on fire (uh, sure) to steadily raise his BA to nearly a buck eighty. At this rate, Wells should approach .225 sometime around Father’s Day.

Should you take a chance on him?

Obviously the transition from Toronto is not going smoothly, but don’t forget that Wells is also dealing with a move to left field after winning three Gold Gloves in centre field for the Jays. How much these changes are weighing on him is impossible to say. He’s also been quite unlucky (.213 BABIP compared to his career mark of .286); that’s bound to average itself out over time.

He’s definitely a buy-low candidate, but as we cautioned before the season, we don’t expect him to repeat his numbers from last year while playing in pitcher-friendly Angels Stadium of Anaheim. But come on – you know Wells is capable of more. If you have the roster space, go ahead and pick him up and wait out his early-season struggles.

By RotoRob
This entry was posted on Thursday, April 28th, 2011 at 12:17 pm and is filed under BASEBALL, MLB Today, RotoRob. You can follow any responses to this entry through the RSS 2.0 feed. You can skip to the end and leave a response. Pinging is currently not allowed.