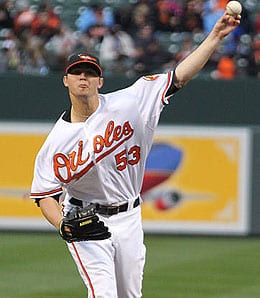 Heading into the 2011 season, there were plenty of pitchers on the Oriole staff that looked poised to take a big step forward. Brian Matusz, Jake Arrieta and Chris Tillman – generally considered the Big Three that will anchor the Baltimore rotation for years to come – would all have been fine selections if you were to predict who would be the team’s best starter a month into the season. Even last year’s “ace” — Jeremy Guthrie — would have been a fine choice.

But how many of us pegged Zack Britton as the best Oriole starter?

It’s an impressive start for the rookie and one worthy of Fantasy consideration in all but very shallow mixed leagues.

While his command has been middling or poor in three of his five starts, Britton’s hit rates have allowed him to succeed. His BABIP has been unsustainably low (.250) so far, so you can expect a correction, but there’s no doubt that Britton has established himself as an early AL ROY front runner. What is perhaps most promising is that the southpaw has held righties to a .197 BAA (lefties are hitting .275 against him).

The other good sign for Britton is his high ground ball rate. If he can maintain that, he’ll go far.

Armed with a hard slider, Britton lowered his ERA to a sparkling 2.84 with Tuesday’s effort. He’s been compared to Mike Hampton, except for the fact that Britton has more velocity. Let;s also hope Britton is less brittle.

The Orioles are definitely taking it easy on Britton as the only time he’s topped 96 pitches was when he threw 103 in his second start (tossing 7 2/3 shutout frames before being lifted). That’s also the only time he’s pitched more than six innings. We’ll see how that plays out over the course of the season. If Baltimore starts to allow Britton to work deeper into games, it should increase his ability to earn Ws – not that this has been a problem so far.

We ranked the 23-year-old as our 22nd-best prospect heading into the season, suggesting at the time that he was very close to joining the team, but probably wouldn’t make it to Baltimore until late in the season. However, his super Spring Training performance and Matusz’s injury opened the door for Britton to join the rotation.

Matusz should be back in a couple of weeks, but there’s no way the O’s can remove Britton at this point. Instead, I’d expect Brad Bergerson or Tillman to lose their rotation spot.

Go ahead and make sure Britton isn’t available in your league, because in very short order, you can bet he won’t be on the wire in any format.

By RotoRob
This entry was posted on Wednesday, April 27th, 2011 at 1:32 pm and is filed under BASEBALL, MLB Today, RotoRob. You can follow any responses to this entry through the RSS 2.0 feed. You can leave a response, or trackback from your own site.