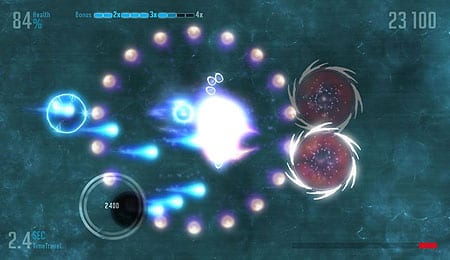 Dodge, fire and time travel!? This ain’t your father’s shmup.

Despite its status as one of gaming’s longest running genres, the side-scrolling shoot ’em up (or “shmup” to those in the know) hasn’t seen much innovation over the years as skills like pattern memorization and bullet-dodging reflexes still rule the roost. Developer Brightside Games’ recent release, Zeit², stays true to that formula while adding an intriguing little wrinkle, time travel. Interest piqued.

For such a straightforward shooter, the controls actually have a mild learning curve. Your primary weapon is fired with the “A” button while the right and left triggers are used to fast-forward and rewind time, respectively. You’ll also build up special weapon blasts with “B” firing a beam and “X” unleashing a chain shot. It takes a little while to get the hang of everything, but once you do it’s a strong setup (which is good because they cannot be remapped).

Please note that the controls may be inverted based on your default Xbox 360 settings and there is no in-game option to correct it. To do so, follow the instructions found here.

Ultra simplistic is an apt description of the visuals in Zeit², which is unsurprising given the game’s humble beginnings as a student project. Set against a largely barren background, your ship sits inside a bubble as a series of rudimentary looking vessels fly toward you. There’s not much variety either, including a colour palette that consists almost exclusively of blues, pinks and white. Even the oversized bosses appear to be little more than a collection of shapes.

The musical accompaniment is understated with the pseudo-techno rock tunes doing an admirable job of matching the streamlined graphics. It’s nothing special, but it easily blends into the background and never gets irritating. Sound effects come across a bit muted.

While Zeit² is obviously a shmup at its core, Brightside Games has made quite a few tweaks to the tried and true formula beyond the time travel element. First of all, enemy ships don’t fire. Instead, most of them siphon health as they pass you — others adopt the kamikaze approach, one keeps dropping off smaller ships and one leaves mines in your path. Basically, anything that emits a blue glow will steal life. Those without it can safely be allowed to pass. Later levels also add indestructible floating turrets that fire in a set pattern and enemies that are only vulnerable after rewinding time.

Second, firing your weapon actually takes away from your health. So if you’re used to holding down the trigger when fighting waves of enemies, you’ll need to make an adjustment. Along those same lines, if your health is in excess of 100 per cent (it tops out at 200) it will continuously drain regardless of what you’re doing until it reaches 100 per cent again — easily my least favourite innovation. Destroying the blue-hued foes will help replenish it as will health packs dropped throughout.

Of course, time traveling is the hook in Zeit², and it is cleverly executed. The basics are you can fast-forward as much as you’d like, but rewinding maxes out at 4.2 seconds — it refills quickly when you grab the collectable arrows from defeated enemies or it will also slowly recover automatically as you advance through the level. When you rewind you leave a shadow behind that duplicates the actions you just performed, which is how you’ll need to tackle waves of enemies that space themselves out in such a way that destroying them all at full speed is oft-times impossible.

Here’s where the game gets tactical. Frequently you can just use your shadow to cover one half of the screen while you cover the other, but you’ve got additional options. Firing into the shadow sends shots in every direction. Fire enough rounds into it and you’ll detonate the shadow, creating a screen-clearing shockwave. Or fly right between a group of enemies, then rewind time and use the beam wave to create a vertical laser of death.

The main game encompasses 16 stages, including four bosses and four mini-bosses. It’s not a ton of content, and you should be able to make your way through in a few hours counting deaths. Four bonus stages open up upon completion, presenting some stiff challenges. In addition, there are a number of secondary modes such as Wave (you can’t let anything past), Tactics (ships that pass you return as something else so you need to plan on which pass to destroy them to maximize points) and Survival (self explanatory but with the twist of increased damage each minute that passes). There is no multiplayer, leaving leaderboards as your only potential interaction with other gamers.

For lack of a better term, Zeit² is a cerebral shmup. It’s a bit short and not everything Brightside Games incorporated turned out to be a gem, but its outside-the-box take on a well-traveled genre makes Zeit² worth experiencing.

By Herija Green
This entry was posted on Thursday, January 20th, 2011 at 5:12 pm and is filed under Herija Green, Video Game Reviews. You can follow any responses to this entry through the RSS 2.0 feed. You can leave a response, or trackback from your own site.