Pigskin Points: Tony Dungy Won’t be Taking over the Vikings 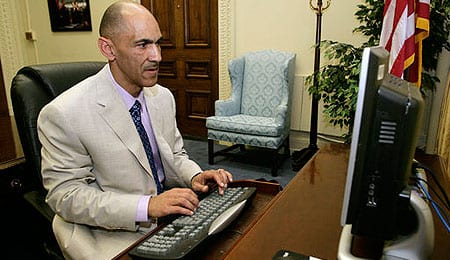 Contrary to much speculation, Tony Dungy will not replace the fired Brad Childress as coach of the Minnesota Vikings. But curiously enough, interim head coach Leslie Frazier said he’s been in contact with Dungy several times since taking over and he’ll continue to lean on the former Colt coach as “a mentor.” We’ll see how long Dungy sticks with his analyst gig for NBC.

Meanwhile, what a stormy season it’s been in Minnesota. Former Super Bowl champion Brett Favre was supposed to take this team back to the big game for the first time since 1977. Instead, he’s been a major headache, and the Vikings got hammered by the Packers on Sunday in what was their last chance to turn their season around.

The New England Patriots — fresh off Sunday’s tight win over Indy which easily might have been a loss had Peyton Manning not made that horrific throw — looked like they might be primed for an upset on Thanksgiving in Detroit. And when the Lions build a 14-3 lead in the second quarter, the upset was brewing.

The Pats dominated the rest of the game, outscoring Detroit 42-10 for a convincing 45-24 trouncing, and yet another one-sided Turkey Day setback for the Lions.

Tom Brady was absolutely sick, earning a perfect quarterback rankings of 158.3 based on his 21-of-27 performance for 341 yards with four TDs and no interceptions. Over the last three games, Brady has been on fire, and he clearly earned himself an extra helping of sweet potatoes with today’s effort.

How about the smelly, hot mess in Tennessee? The Titans’ promising season has unraveled with three straight losses, and the tumultuous relationship between quarterback Vince Young and coach Jeff Fisher is at the centre of this storm. Of course, Fisher won’t have to deal with Young for the remainder of the season because a thumb injury will sideline the QB until next season. And if the Titans – with Rusty Smith as their QB — can’t beat Houston this week, the two teams will be tied for last place in the AFC South. And after the disappointment of last season, how much rope does Fisher have left?

If Ricky Williams was dumped in your league after his disappearing act against the Bears, you may want to add him for this weekend’s matchup against the Raiders. With Tyler Thigpen possibly having to make another start at QB for the Dolphins, expect them to go run-heavy – especially against a weak Oakland rush defense. Ronnie Brown should be in line for a big day, but Williams should also benefit this weekend.

By RotoRob
This entry was posted on Thursday, November 25th, 2010 at 5:32 pm and is filed under FOOTBALL, Pigskin Points, RotoRob. You can follow any responses to this entry through the RSS 2.0 feed. You can leave a response, or trackback from your own site.