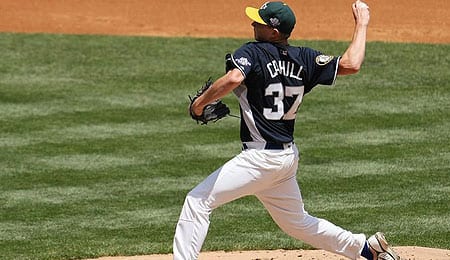 Trevor Cahill struggled in his first outing, but he was a double-digit winner as a rook last year.

With Tim McLeod off at a Gummy Bear convention (or something like that) this week, we turn the Wire Troll controls over to yours truly. Not to worry, though…ever-vigilant Tim sent me some thoughts on whom to include to make sure I didn’t screw things up too badly. Let’s get to it.

Trevor Cahill/Vin Mazzaro, SP, Oakland Athletics: Brett Anderson is already out at least a month, and it sure as hell looks as though oft-injured Justin Duchscherer is about to join him on the DL. Crappy news for the A’s, who are off to a good start, but great news for both Cahill and Mazzaro, who will get to join the A’s rotation for the foreseeable future. Cahill sure didn’t look good in his first start Friday, but he won 10 games as a rookie with the A’s last season and in his two starts at Triple-A before his recall, he sparkled. While Duchscherer hasn’t officially been put on the DL, considering his history with hip injuries, it’s most likely a matter of when not if. And when that happens, Mazzaro is the most likely candidate to take his starts. Mazzaro was hit hard in the bigs last year, but he’s been a superb Triple-A pitcher the past couple of seasons, and is averaging better than a K per inning with a 2.59 ERA through four starts and one relief appearance at Sacramento. Both Cahill and Mazzaro are worth gambling on in AL-only leagues, but you’re probably best off cherry picking when to start them until they get into a rhythm.

Evan Meek, RP, Pittsburgh Pirates: With closer Octavio Dotel having pitched twice in three days, including a two-inning stint on Wednesday, the Pirates summoned Meek to earn the save Thursday, and he did so flawlessly. As spotty as Dotel has been so far (10.61 ERA, two blown saves in five tries), could the Meek inherent the saves in Steel City? Meek has dominated so far this year, and he’s clearly the best option the Pirates have in the bullpen. Given Dotel’s shaky history as a closer, this is a change we expect sooner rather than later, so now’s the time to grab Meek before his value goes through the roof.

Cliff Pennington, SS, Oakland Athletics: Pennington has replaced the slumping Rajai Davis as the lead-off hitter in Oakland and has been getting the job done with a 926 OPS, one homer, one steal and four runs in the last six games. Shortstop is a Fantasy wasteland right now and Pennington should get a nice boost in runs atop the A’s lineup, despite the fact that it is still a middling offence at best, so go ahead and add him in AL-only leagues.

Take Your Best Guess, RP, Milwaukee Brewers: It has become obvious that Trevor Hoffman is in trouble in the early going. His changeup – one of the greatest weapons in the history of the game – ain’t fooling anybody anymore. So who gets the first crack when Hoffman is finally relieved of his duties in Beer City? Manager Ken Macha says LaTroy Hawkins would be the first possible replacement, but as everyone knows, Hawkins has struggled to close games in the past. Todd Coffey is another possibility (he has done a bit of closing in the past for the Reds), and he’s certainly pitched better than either Hoffman or Hawkins this season. But the hottest reliever in Milwaukee, and our choice to emerge with the job, is Carlos Villaneuva, who has yielded just five hits and no runs with 17 strikeouts in 13 IP. If you think Hoffman is toast, taking a shot on Villanueva could be a very wise move.

David Freese, 3B, St. Louis Cardinals: The rook’s on a rampage, and it goes well beyond his six-RBI barrage Thursday. Freese has hit in five straight games, including three multi-hit efforts, with a pair of doubles, two dingers and 10 RBI. All told, he’s up to 15 RBI in 21 games at a fairly weak position. Go ahead and scoop up the kid in NL-only leagues.

By RotoRob
This entry was posted on Sunday, May 2nd, 2010 at 12:29 pm and is filed under BASEBALL, RotoRob, The Wire Troll. You can follow any responses to this entry through the RSS 2.0 feed. You can leave a response, or trackback from your own site.