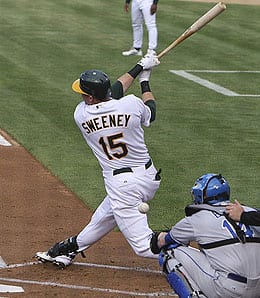 It’s been Ryan Sweeney — not Kurt Suzuki — batting in the three-hole for the A’s.

It’s now been four years since the Oakland A’s last took home the AL West title, winning 93 games that season. Since then, it’s been 76, 75 and 75 wins, and it wouldn’t shock me to see the A’s struggle to match that total this season in what is clearly a rebuilding year.

The team divested itself of many of the high-priced and often underperforming veterans that littered the roster last year.

Jason Giambi was released in early August; in late-July, Matt Holliday was dealt to the Cards for a package of prospects; Nomar Garciaparra, finally realizing his battered body was done like dinner, retired; Bobby Crosby left as a free agent; and Orlando Cabrera was dealt away at the deadline for a prospect.

The A’s have a much different look this season as a result. Kurt Suzuki was rumoured to be the team’s new No. 3 hitter, but he’s hit fifth in each game so far with Ryan Sweeney batting in the three hole. After going hitless in the opener (although he did draw a walk), Suzuki went yard on Tuesday, part of a two-hit effort. After showing some improved pop last season (15 dingers), it’s a great start for Suzuki, who should see lots of action this year considering his backup (Jake Fox) isn’t really a catcher anymore. He could still be available in deeper mixed leagues, so don’t hesitate to pick Suzuki up if you need catching help.

One Athletic who is likely unowned in most leagues is Mark Ellis, and he played the hero Tuesday night as the A’s won in extra innings. He capped a three-hit night with a single to drive in the game winner for Oakland’s first victory of the season, in walkoff fashion no less. He’s injury prone, yes, but after bouncing back somewhat last season, Ellis is off to a fine start in 2010, so if you need some middle infield help for your AL-only league team, he could be a good bet. Considering he doesn’t tend to get off to good starts, this is a great sign for Ellis.

New staff ace Ben Sheets wasn’t overly sharp in his Oakland debut, but he wasn’t awful, getting a no decision in a game the A’s ultimately dropped to Seattle. He threw a lot of pitches (94) to get through five innings, and four walks against just three strikeouts sure didn’t help matters. Sheets may still be out there in some mixed leagues, but if you plan to pick him up, note that he gets a hot-hitting Angel squad in his next start, so you may just want to leave him on the pine for now if you have a better option.

The A’s starter in Game Two, Dallas Braden, fared much better, limiting the Mariners to four hits and one run over seven innings, He walked just one and struck out a career-high 10 – very uncharacteristic for a hurler who has averaged less than six Ks/9 in his career. Braden averaged 10.1 Ks/9 as a minor leaguer, so the potential is there, but I can’t imagine him putting up more than, say, seven Ks/9 this season. Still, Braden is widely available in most leagues, and is bound to be a popular wire pick this week after his brilliant debut.

With Cabrera gone, Cliff Pennington takes the shortstop gig from Opening Day. He smacked a pair of hits and drove in a run in the Opener, and drew three walks Tuesday, so GM Billy Beane must be getting wood looking at the kid’s OBP so far. Pennington is yet another Athletic who can be had in almost Fantasy format. And if this keeps up, I expect him to quickly gain traction in AL-only leagues.

Newcomer Edwar Ramirez earned the win Tuesday with a perfect 10th inning – his first W since September 2008. After the Yanks DFAed him in February, Ramirez was dealt twice – first to Texas, before the Rangers flipped him to Oakland. He looked extremely good in 2008 before faltering last season, so keep your eye on Ramirez to see if he can carve out an important role in the Oakland pen. Of course, with Michael Wuertz dealing with a shoulder injury that could sideline him for another couple of weeks, Ramirez has a great opportunity to establish himself as a key cog for the A’s.

There are plenty of fears that Rajai Davis’ performance last year was a smoke and mirrors act. He enjoyed a solid opener with two hits, a run, a ribbie and a steal, but took an 0-for-5 Tuesday, striking out twice, including in the bottom of the ninth with a chance to win the game, when he was done in by three curveballs. Coco Crisp is currently out, so Davis is occupying the lead-off spot for the A’s; now is his chance to entrench himself in this role, but if he struggles to make contact, then he’ll be leaving his chief weapon – speed – in the arsenal.

By RotoRob
This entry was posted on Wednesday, April 7th, 2010 at 11:39 am and is filed under BASEBALL, RotoRob, Team report. You can follow any responses to this entry through the RSS 2.0 feed. You can leave a response, or trackback from your own site.