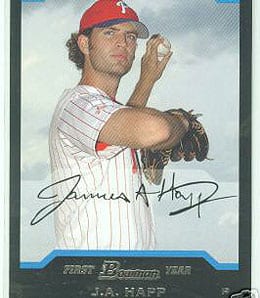 Can J.A. Happ possibly duplicate his success from 2009?

As we all know, J.A. Happ enjoyed a superb rookie season for the Philadelphia Phillies in 2009. In fact, he was a waiver wire darling, even earning a spot on our prestigious NL All Wire Troll Team. Many believed he deserved to also win the NL ROY, although that honour went to Chris Coghlan of the Marlins.

But the real question here is what can we expect from Happ in 2010?

He was pretty consistent all season long, more or less avoiding the rookie wall, although September was his worst month (.329 BAA). But even in that final month of the season, Happ’s command was off the charts (21 Ks against just four walks).

Happ got tougher as the situation ratcheted up, which is a great sign. His OPS against with no one on was 753; with runners on, it dropped to 645. With runners in scoring position it plummeted to 472 and with RISP and two outs it was 501. Bases loaded situations? Try a 221 OPS against.

Freaking impressive shit, eh? On the surface, it appears that Happ has set himself up for a solid run as a major league starter.

However, numbers can often lie. And in Happ’s case, the truth is, he’s due for a serious fall.

Happ’s Fielder Independent Pitching (FIP) was 4.33, meaning his actual ERA was a whopping 1.4 runs lower. Historically, pitchers whose FIPs are that much higher than their actual ERAs experience a serious correction the following season.

He stranded over 85 per cent of his runners, and that’s abnormally high. You also can’t expect the kid to possibly perform as well with RISP again.

Those of you who are thinking that Happ is going to be contending for Cy Young awards going forward are in need of a bit of a reality check. A more likely scenario would see him record a 2010 ERA of anywhere from 4.25 to 5.30. Not awful, assuming it’s closer to the first figure, but a far cry from the sub-3.00 Happ put up as a rookie. And you definitely know he won’t be tied for the team lead in wins again (regardless of the arrival of Roy Halladay).

Temper your expectations – and bidding price – for Happ accordingly.

By RotoRob
This entry was posted on Wednesday, February 10th, 2010 at 3:12 pm and is filed under BASEBALL, RotoRob. You can follow any responses to this entry through the RSS 2.0 feed. You can leave a response, or trackback from your own site.