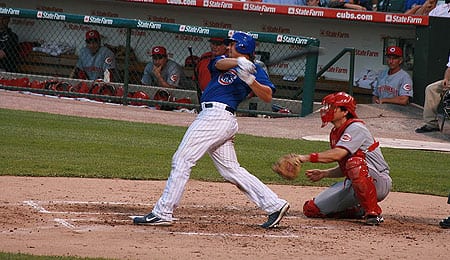 Geovany Soto — and his Fantasy owners — did plenty of swinging and missing in 2009.

The World Baseball Classic hangover effect and the Cubs’ shocking lack of offense in 2009 – two trends that surprised us this year and manifested themselves no more clearly in anyone other than Geovany Soto.

If you selected Soto in your Fantasy draft last spring, chances are you wound up about as happy as a chocolate chip cookie-less Tim. (For the record, this is not a joyous creature in the least, and I’d highly recommend taking evasive action should you encounter this beast in the wild.)

Just a year removed from taking home the NL ROY and looking like a player you could build around, for virtually all of 2009 Soto flopped like gasping fish on an on-deck circle. Or something like that.

At any rate, the question of how much impact playing in the WBC had on Soto is a legitimate one – especially when looking at how Russell Martin fared this year. Soto managed just 11 dingers, and a half dozen of those came in June. Uh…okay.

And just as his 1100 OPS in 54 at bats in 2007 was an unrealistic barometer, Soto fell a shocking 166 points of OPS from his historic rookie effort. Clearly, we need to recalculate our expectations of him for 2010.

You have to know Soto will bounce back against lefties, and I fully expect this to be the source of most of his rebound next year.

If I were a betting man (no comment, please), I’d say that an OPS of 825 is a safe estimate for Soto for 2010. Any more will be serious gravy (mmmm…gravy…mmm); if he’s below that, it will be a tiny shortfall, so I wouldn’t concern myself.

By RotoRob
This entry was posted on Tuesday, December 22nd, 2009 at 3:51 pm and is filed under BASEBALL, RotoRob. You can follow any responses to this entry through the RSS 2.0 feed. You can leave a response, or trackback from your own site.