Fantasy Notes: Casey at the Bat…or Not 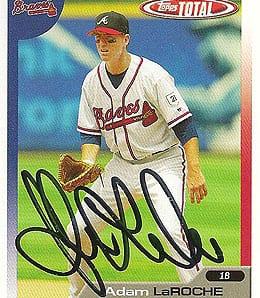 The Atlanta Braves sure got the better end in the Adam LaRoche-Casey Kotchman deal.

A couple of months ago, we pegged Casey Kotchman as our Daily Dump and that was a bit of a slam dunk. While he saw a bit more action down the stretch, Kotchman continued to scuffle in Beantown, batting just .214 with a 545 OPS in September, faring only slightly better in his three games in October.

In the ALDS, he was a complete non-factor, going hitless in his only at-bat. Then again, it’s not as if the left-handed hitter is Mr. Dangerous off the bench with a 760 OPS vs. righties. Oooh…better bring in a lefty specialist to deal with that. Clearly, the Braves got the better of this deadline deal as Adam LaRoche provided a real spark for Atlanta, while Kotchman languished on the bench in Boston. No longer a full-time player – and definitely not threatening to become one in Boston – even Kotchman’s legendary walk rate dipped this season.

He’s obviously a much better player than he showed down the stretch, and he’s only 26 so there could still be a very big season or two in his bat, but Kotchman needs PT to perform. And he won’t get much of that in Boston, barring injuries. So, barring a change in his situation, go ahead and scratch Kotchman off your cheat sheets for 2010 unless you’re in a very deep AL-only league.

We’ve already done our 2009 wrap up of the Atlanta Braves, but I wanted to talk about how their catchers did this year.

Quick, among players who spent the entire season with the Braves, who led the team in slugging percentage? Chipper Jones? Not even close. Brian McCann? Good guess, but no cigar. Try back-up catcher David Ross. Signed as a free agent in December to a two-year deal for what now seems like a bargain price of $3 million, Ross enjoyed his finest season since 2006 (I clearly underestimated his ability in my 2008 Free Agency Report).

Obviously in his back-up capacity to McCann – one of the best backstops in the biz – he didn’t see enough action to be Fantasy worthy except in extremely deep NL-only leagues. But in terms of his real baseball value, he was a very reliable bat, allowing the Braves to spell McCann a bit more often this season. Ross was quite productive, and despite a decline in his walk rate, he enjoyed a very good OBP. Strangely, the right-handed hitting Ross has been somewhat of an anomaly the past couple of seasons, performing better against righties than lefties. This season, the splits were downright shocking as he recorded a 996 OPS against righties – almost 350 points higher than what he did against southpaws. You’d think this would make him a valuable bat off the bench, but the Braves generally only carried two catchers, so using Ross as a PHer would have almost forced them to take McCann out of the game.

As mentioned, Ross is signed through 2010, and McCann isn’t going anywhere, so Ross will have to reprise his role as a backup. But should McCann suffer an injury, Ross could be a very strong pickup, so he needs to be on your watch list for 2010.

Speaking of McCann, when we last checked in on him, he had just finished scuffling through a down month of August. While he turned things around in September (four homers, 20 RBI, .275 BA), he still didn’t exactly finish on fire. October was no hell, either (2-for-9, but a pair of ribbies). Overall, McCann did not have quite as good as year as he did in 2008, and his strike zone judgment in particular suffered, a key reason why he lost 20 points in batting.

His number dropped in the second half, which is quite typical for catchers who tend to wear down as the season progresses, but McCann still delivered at least 35 doubles for the third straight season and he put up a career best in RBI, so Fantasy owners can’t be too disappointed. Still, when looking at the big picture, it’s hard not to be impressed with what McCann has accomplished in his career at the tender age of 25. He recently had his high school number retired, and the way things are going in his big league career, the Braves may one day follow suit.

Obviously, McCann will again be one of the first catchers off the board in drafts next spring.

By RotoRob
This entry was posted on Wednesday, November 4th, 2009 at 4:50 pm and is filed under BASEBALL, Fantasy Notes, RotoRob. You can follow any responses to this entry through the RSS 2.0 feed. You can leave a response, or trackback from your own site.