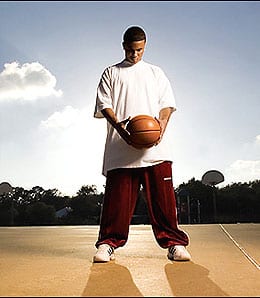 D.J. Augustin could give Raymond Felton a run for his money.

Raymond Felton continues to struggle from the floor as an NBA point guard. His FG percentage has dipped in each of his three seasons, and judging by his performance Monday (4-for-12), he’s not about to start draining them soon. The fact that this stinker came against New Jersey – one of the worst teams in the NBA as far as opponents’ FG percentage goes – makes it even more alarming. Felton showed signs of life when he shot the ball very well down the stretch last season, but he has not carried that over into this campaign. Felton’s six assists to 14 turnovers in the last two games can’t be thrilling you, either.

D.J. Augustin has a chance to make hay with Felton struggling, and he’s sunk 46.4 per cent of his shots in the past three games. Note that Augustin almost played as many minutes as Felton did on Monday. This could brew into a position battle very soon – especially with the Bobcats’ offense in such desperate need for a kick start. As long as the team is doing okay (2-2 so far), coach Larry Brown probably won’t rock the boat, but if the Cats slip into a losing skid, there could be changes.

Not much attention has been paid to Chuck Hayes in the wake of Yao Ming’s injury. While guys like Luis Scola and Carl Landry have been hyped, no one is talking about Hayes. Well, have you noticed that it has been Hayes getting the starts at centre for the Rockets? Okay, so he’s not going to be lighting it up with 20-point games, but he’s a solid rebounder who will pitch in given the minutes he’s been getting. Monday, Hayes shot very well (6-for-8), scoring 12 points with nine rebounds, three steals and three assists. You could do worse from your centre spot, so I suggest at least putting Hayes on your watch list. Just saying…

Brook Lopez was a ridiculously hot commodity during the drafting season, and with good reason – he’s poised to take a major step forward. So far, so good for the sophomore centre, but we need to remember that he’s a very young big man, and with that comes inconsistency. So you’ve got to rein in your expectations somewhat and learn to take the good with the bad. Monday, for instance, as the Nets fell to 0-4 on the season, Lopez shot very well, going 8-for-14 for 18 points while swatting another four shots. Fantastic, right? But then you see that he only managed five rebounds, failed to get an assist or steal and worst of all – committed seven turnovers. Gulp. That’ll leave a mark.

Didn’t it seem like Darius Songaila might have a chance to have value with the Hornets this year? Uh, maybe not. Now that Emeka Okafor is healthy, Songaila isn’t seeing nearly enough PT off the bench to be worth tracking. In fact, he’s never been more useless.

The Sacramento Kings finally busted their victory cherry Monday, beating the equally woeful Memphis Grizzlies in overtime. Andres Nocioni has been quiet so far, but he did pitch in with a pair of treys plus two blocks on Monday as he managed a 13-point game. Not bad, but he’s seeing less PT than needed to provide a serious boost for your team. Has he already been passed on the depth chart by rookie Omri Casspi? Given the amount of minutes Casspi’s gotten the past couple of games, that seems to be the direction this team is headed. I’d recommend giving Nocioni another couple of games and then cutting bait if he doesn’t start getting closer to 25 MPG.

The Jazz is off to its worst start in seven years and things don’t get any easier with a trip to Dallas on Tuesday night. What’s going on with Utah? Well, for starters, the defense has been atrocious. The Jazz D wasn’t great last year, but so far this season it’s been ugly, with the team giving up more than 108 PPG. On offense, team leader Deron Williams has been struggling with his shot. Two years ago, D-Will shot 50.7 per cent, but last year he slipped to 47.1 per cent. Okay, maybe the ankle was a problem last season, but he’s over that now, right? Well, he’s hit just 14-of-39 (35.9 per cent) in his last two games, dropping him to 42.6 per cent for the season. It’s early, but this is a troubling trend for those of you who spent your first rounder on Williams.

I’ll be interested to see how the Wizards — who are definitely improved so far, despite all the injuries — match up against the Cavs in Cleveland Tuesday. Antawn Jamison won’t be back for another couple of weeks, but Washington will get Caron Butler (bruised left kneecap) back, so make sure he’s in your lineup. Butler’s return will likely mean that Randy Foye heads back to the bench, while Mike Miller returns to SG after starting at SF last game.

By RotoRob
This entry was posted on Tuesday, November 3rd, 2009 at 11:33 am and is filed under BASKETBALL, NBA Today, RotoRob. You can follow any responses to this entry through the RSS 2.0 feed. You can leave a response, or trackback from your own site.