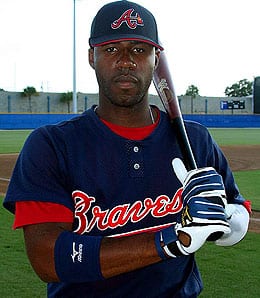 Jason Heyward’s emergence could be bad news for Jordan Schafer.

In most organizations, Jordan Schafer would probably still be the top young outfielder on the team. But these are the Atlanta Braves, who have another uber prospect on the way in the form of Jason Heyward – considered the best prospect in the game – and that could spell seriously bad news for Schafer.

Many were surprised when Schafer won a job with the Braves directly out of Spring Training, but when he enjoyed a solid April, it looked like a wise decision. However, May brought with it serious scuffles for Schafer, and by early June, he was sent back to Triple-A. He didn’t exactly tear it up in the minors, either, struggling with making contact and almost immediately suffering a wrist injury that would ultimately end his season early. As we expected, Schafer never did make it back to Atlanta in September.

In 50 games with the Braves, he recorded an OPS of just 600, proving he wasn’t quite ready for prime time play. Unfortunately, even though Schafer just turned 23 last month, he’s already been passed by Heyward, so he definitely won’t be handed a job next spring. And as excited as Fantasy owners are about Heyward’s potential, the Braves may have learned their lesson from the Schafer fiasco and ease Heyward into the majors as a result.

For Schafer, however, it may turn out to be that this was his one-year window to run with a job. I find it hard to believe he won’t get more chances, but perhaps they may need to happen in another organization.

There will be a bit more outfield time in Atlanta once the club divests themselves of veteran Greg Norton, whose power inexplicably disappeared completely this season. He actually wound up drawing walks at a higher rate than ever before (and was one of the few Braves to post an OBP of over .400 in the second half), but who cares? This is a 37-year-old pinch hitter who we characterized as “middling” last season, who now dreams of attaining “middling” status. That the Braves trotted him out there in key situations was a travesty. It might be just about time for this old dude to pack it in.

By RotoRob
This entry was posted on Tuesday, October 13th, 2009 at 1:08 pm and is filed under BASEBALL, Fantasy Notes, RotoRob. You can follow any responses to this entry through the RSS 2.0 feed. You can leave a response, or trackback from your own site.