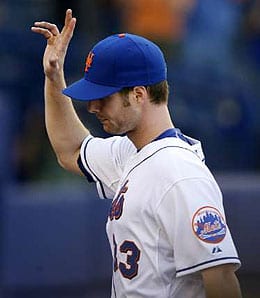 Has John Maine turned the corner?

Carlos Beltran has his 16-game hitting streak – and run of 30 straight games reaching base (which dated back to last season) – snapped on Wednesday night. It’s been an extremely impressive start to the season for Beltran, who leads the NL in hitting, ranks second in OBP and is also in the top 10 in OPS, slugging and walks. He’s been durable the past couple of years, and is sure to score plenty of runs in that Met offense, but note that Beltran’s power has been on the wane for several years. Hopefully that two-dinger night Monday (which doubled his season total) is a sign that his pop is coming back, because while a .400 BA is money, without the power, Beltran is not quite delivering on our pre-season ranking as the fourth-best outfielder. He’s still a Top 10 flyhawk, but it’s interesting to see the effect that Citi Field is having on him. Beltran is batting “just” .326 at home without a home run, while on the road, he’s tearing it up at the ridiculous pace of .471.

Another Met who has been hitting well lately is David Wright. He was also hitless Wednesday, but had been coming off back-to-back multi-hit games and had driven in at least one run in four straight games. Wright is an extremely durable player, but he hasn’t come close to earning the No. 1 ranking among third basemen on our pre-season list. Yes, he’s on pace for his first 100-walk season, but what’s up with all the strikeouts? Wright is whiffing way more often than normal, and this significant dip in his batting eye has me concerned a bit. I’m going to be interested to see if this trend continues. Another negative trend I’m seeing with Wright is the tanking of his base stealing skills. Two seasons ago, when he enjoyed that career year, he swiped 34 bags in 39 tries. Last season, that dipped to 15 in 20, still a pretty decent percentage, but obviously a major drop off in terms of his overall use of the running game. Well, Wright’s running wild again this season, but he’s having a hell of a tough time doing so. After getting nabbed for the second straight game on Wednesday, Wright is now just 4-of-9 on the basepaths through the first month and change. If that poor ratio continues, I’d expect to see the Mets rein in his running efforts.

What’s up with the Mets’ issues in Atlanta? Even in recent seasons, when they’ve been a contender and the Braves have struggled, the Mets still have a hell of a tough time winning at Turner Field. That’s what made that sweep of the two-game mini series earlier this week so sweet. Last year, the lowly Braves took eight of nine from New York at Turner, and prior to this sweep, had gone 63-29 against the Mets in Atlanta since the beginning of 1998. Neither team is exactly kicking ass in the early going, but if New York can truly overcome its issues winning in Atlanta, that will be a big boost for a team looking to get back to the playoffs after September swoons cost it in each of the past two seasons. The Mets will kick off the second half of the schedule with a four-game set at Turner, and obviously we’ll have a much clearer idea if either or both of these teams are contenders by then.

It may be time to give John Maine another look if you need pitching help. He’s won his last two starts in impressive (12 IP, four hits, 11 Ks) and frustrating (nine walks, including a career-high six in his last start) manner. I’m loving the hit rates so far, but how much of that is a product of his wildness is up for debate. If Maine can stay healthy this year, and learn to trust his fastball more, he’ll be fine. And judging by the season-high seven Ks he racked up his last start, he’s headed in that direction. Plenty of owners are bailing on Maine because of that awful command; I think he’s about to turn the corner, and a start this weekend at home – where he’s been better – against the Pirates, who are once again struggling offensively, should make for a good bet. Pick him up.

Still with the Mets, Francisco Rodriguez tossed a perfect inning Wednesday for his third save in as many days. We talked about the difference he made for the Mets right from Opening Day, and so far, he’s done nothing to alter those thoughts. K-Rod has done a superb job limiting baserunners, and he’s been the key reason why the Mets’ bullpen woes have disappeared – they currently have the best pen in the NL. Now, if only their starters would get their shit together, maybe the Mets could get over .500.

Javier Vazquez, part of a major retooling of the Atlanta rotation this offseason, has been slapped around in losing his last two starts (16 hits, 11 runs and three homers in 14 2/3 IP), but even when he was getting tagged for a season-high six runs on Monday, he was still racking up the Ks. Vazquez has always been a solid strikeout pitcher, recording 200 or more four times, including the past two seasons. But this year, with 11.64 K/9, he’s been otherworldly. The fact that his command has been so sharp and that his hit rates are down as well tells me that the early-season improvements could be for real. Perhaps he’s just glad to be back in the NL, where he enjoyed his finest seasons. More likely, escaping the hitter’s paradise that is U.S. Cellular Field did the trick. Vazquez’s poor showings in his last couple of starts have him showing up on the wire in some leagues; don’t make that mistake.

By RotoRob
Tags: BASEBALL
This entry was posted on Thursday, May 7th, 2009 at 9:17 am and is filed under BASEBALL, Fantasy Notes, RotoRob. You can follow any responses to this entry through the RSS 2.0 feed. You can leave a response, or trackback from your own site.