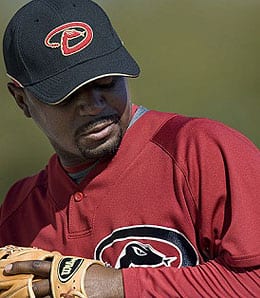 Tom Gordon is back for a 21st season while his kid gets closer to the bigs. (David Wallace/The Arizona Republic)

Ancient reliever Tom Gordon has been activated from the DL by the D-Backs as he begins his 21st big league season. Meanwhile, Flash’s son Devaris is looking like a steal for the Dodgers, who plucked him in the fourth round of last year’s draft. This young shortstop, who just turned 21 last week, caught our eye last season after a very impressive professional debut at Rookie Ball. Well, this season he’s been promoted to Single-A, and after a somewhat sluggish start, Gordon is smacking the ball around and burning up the basepaths again. Monday, he went 3-for-5 with three runs and two RBI, spanking a triple and stealing a base. Gordon has a five-game hit streak, raising his BA up to .299 with 10 runs and six steals in 16 games. This kid could be a future top-of-the-order threat if he can improve his patience as he moves up the ladder. Keeper league owners with deep minor league systems should have Flash’s spawn on their radar.

Still with the Dodgers, what’s wrong with Clayton Kershaw his last couple of outings? After looking so brilliant in his first two starts (12 IP, three hits, 19 Ks, but five walks), he’s been slapped around hard in his last two, including an extremely rough outing in Colorado on Sunday. In suffering back-to-back losses, Kershaw has been shelled for 16 hits and 15 runs in nine innings combined, striking out seven and walking six. After holding his own as a rookie last season, he’s suddenly experiencing some serious growing pains in year two. But let’s put things in perspective – this is a kid who just turned 21 last month. He gets the Padres at home on Friday, so I like Kershaw’s chances to right the ship in his next outing. On the off chance his owner dumped him (perhaps in a H2H league), I’d go ahead and grab Kershaw and ride out this bumpy stretch. This is a special talent who really not that long ago was a still a prospect (he was our fifth-ranked prospect in 2008, graduating from the list this season). The fact that he’s shot through the system so quickly makes us almost forget he’s as young as he is. And like most young pitchers, Kershaw will likely be somewhat inconsistent.

By RotoRob
This entry was posted on Tuesday, April 28th, 2009 at 7:30 am and is filed under BASEBALL, Fantasy Notes, RotoRob. You can follow any responses to this entry through the RSS 2.0 feed. You can skip to the end and leave a response. Pinging is currently not allowed.