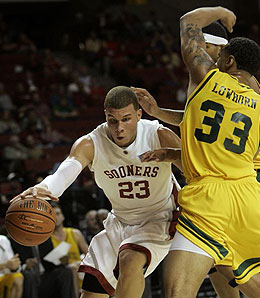 Tonight’s Wizard-Thunder Battle Royale is henceforth known as “The Blake Griffin Bowl.” What’s that? They don’t have bowl games in basketball? Well, screw you and your little dog, too!

The Thunder, who has really helped build a solid local fanbase by sporting the association’s worst record in its first season in Oklahoma City, has a rare opportunity to actually win a game Saturday night when it heads into Washington, losers of eight straight. Call it the Blake Griffin Bowl. (By the way, how freaking sweet would it be for OKC to land the Sooner star and local boy? I’m not saying the Thunder is tanking the season, I’m just saying it would work out well if the team won the lottery, wouldn’t it?)

An interesting sidenote of this game is the fact that OKC’s top two gunners – sophomores Kevin Durant and Jeff Green – both grew up in the Washington area. Durant has been getting better and better as the season has gone on, and with six straight games of at least 25 points, he’s now averaging 25.7 PPG in December. After spending most of his rookie season struggling with his shot, Durant is showing a much better touch in his second NBA season, draining them at a 46.5 per cent clip. I took Durant early in the fourth round, and while he was a bit inconsistent in the early going, since moving back to his natural position at the three, he’s been as steady a player as I own in recent weeks. (Of course, perhaps that speaks more to the lack of quality of my team than it does to KD’s emergence as a fantasy stud.)

Earlier in the season, we suggested that Green could be the Thunder’s best player, but he clearly has conceded that honour to Durant lately. That’s not to say that Green hasn’t been playing very well, however. A player capable of helping in multiple categories, he’s been doing some yeomen work on the glass lately, averaging 10 RPG over the past three games, the first two of which were double-doubles for him. Friday night, he didn’t shoot well, but still pitched in with four assists. Green’s shooting touch has improved each month of the season, naturally taking his scoring up with it. Surprisingly, however, despite more attempts from beyond the arc this month, he’s actually sinking less treys. The move to full-time starter this year has definitely worked out for Green, as he’s responded to heavier minutes and more touches by improving his numbers across the board – all the while maintaining his turnover rate. If you’re in a more shallow league and Green is unowned, I’d take a look at him, because I expect his value to continue to increase as the season progresses, and he tends to fly under the radar on the Thunder because of Durant.

Both Thunder soph stars will be looking to make up for a dismal effort (a combined 11-for-34 shooting performance) in their one and only game at the Verizon Center last season. I’m expecting better things out of both of them tonight as the franchise looks to put the breaks on a four-game losing skid against the Wizards.

OKC will be looking to stop a couple of streaks tonight. It’s lost seven straight on the road and has been beaten up badly by Eastern Conference teams (1-13…ya, ya, it’s one win is against the Raptors, but we were going to let that one slide). At this pace, the Thunder is going to be extremely hard-pressed to match the whopping 20 wins the Sonics put up – eight of which were against Eastern teams – in their final season in Em City. By the way, those 20 wins represented the lowest ever in the 41-year history of this organization. Until this year, that is. The team is on pace to win eight games. Eight. Imagine cutting off two of your fingers and still being able to count your team’s wins on both hands. And don’t for a minute think that there won’t be die-hard Thunder fans who will be reaching for the Ginsu soon.

We’ve already recommended him recently, but one dude on the Thunder that may provide some decent value as a short-term pickup is Chris Wilcox. A dislocated finger held him back in the past couple of weeks, but judging by the last two games, he’s over it. He’s averaged 15.5 PPG, 10 RPG and 1 APG, while playing an average of 23 MPG. I’d like to see him get at least 25 MPG (especially now, with Nick Collison hurting), but Wilcox is headed in the right direction in what’s been a frustrating season for his owners (I grabbed him with a late-round pick, but cut bait early), as injuries have really limited his PT and touches. And as a big man who doesn’t block many shots, Wilcox’s value is really tied to his shot attempts, as if he’s not scoring, he’s not worth owning. And at just eight shot attempts per game and 9.0 PPG for the season, for the most part, Wilcox has deserved to be on the wire. He’s teasing us again with his talent, but note that Nenad Krstic will be joining OKC next week, so unless Wilcox is dealt, his value will be very short-lived.

If you haven’t yet dropped Earl Watson, may I ask why? He’s been under 20 minutes in three of the last four games, scoring a combined eight points over this stretch. Sure, he’s averaged 6.5 APG in the last two, but as the team commits fully to developing PG of the future (and hell, at this point, of the present, too) Russell Westbrook, Watson’s PT has slipped to the point where all he can do is help you in assists if you are desperate for a few dimes.

By RotoRob
This entry was posted on Saturday, December 27th, 2008 at 3:56 pm and is filed under BASKETBALL, Fantasy Notes, RotoRob. You can follow any responses to this entry through the RSS 2.0 feed. You can leave a response, or trackback from your own site.