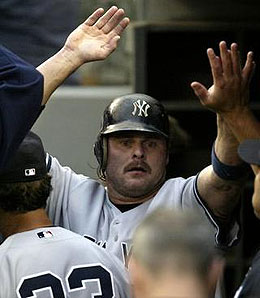 After missing the playoffs for the first time since 1993 (considering there were no playoffs in 1994), the New York Yankees have begun an offseason of change.

While Giambi stayed somewhat healthy for once, seeing his most action since 2003 with 145 games, he’s clearly not the same player that terrorized AL pitchers and walked away with an MVP award in 2000 for Oakland. His power made a nice recovery in the wake of his involvement in the steroid scandal, and his strike zone judgment bounced back somewhat, but this is not a dude who will ever again threaten the .300 mark. A second half slump (.239 BA, 824 OPS) muted what was otherwise a fine comeback season.

Talk that Giambi will return to the A’s has heated up as on Tuesday Oakland brought in Bob Alejo as its strength and conditioning coach – the same man who worked for the A’s from 1993 to 2001 and then followed Giambi to the Big Apple.

Keeper league owners should note that Giambi has been much better at home than on the road in recent years – particularly in 2002 (929 OPS at home compared to a road mark of just 826). Do note that if he winds up in Oakland, Giambi has hit very well there in the past few seasons, so it’s not all bad news.

Yankee GM Brian Cashman hasn’t ruled out re-signing Giambi at a lower price, and hell, he didn’t even suggest that bringing back Pavano was impossible – even though there’s a better chance that Kirby Puckett makes a comeback next season.

But the fact is that both these dudes are gonzo, and in Pavano’s case, there are probably several million Yankee fans saying ‘don’t let the door hit you in the ass on the way out.’

Pavano’s four-year, $39.95 million deal wound up being one of the most colossally overpriced contracts in Yankee (if not baseball) history, and that’s saying a lot, considering the Yanks have had plenty of them over the years (Andy Hawkins, anyone?).

It’s not as if Pavano’s return to action this season provided any hope that he’s even close to returning to the form that made him an 18-game winner in 2004 and prompted the Yankees to shell out all that cash for him. He was way too hittable, had awful command, couldn’t strike anyone out, and was surrendering too many long balls.

The result was an ERA north of five and three quarters – hardly a number that is going to spur anyone to take much of a chance on him. In fact, I wouldn’t be shocked – even given the paucity of starting pitching — if Pavano had to sign a minor league deal.

Finally, in other Yankee-related news, Andy Pettitte has said he’d like to come back and pitch in New York in 2009, confirming a decision he was already leaning towards for a while now.

The aging lefty was particularly rancid down the stretch – going 2-7 with a 6.23 ERA over his final 11 starts, and skipping his final outing with a sore shoulder.

Pettitte says his pitching shoulder has checked out and he does not require surgery.

By RotoRob
This entry was posted on Wednesday, November 5th, 2008 at 12:59 pm and is filed under BASEBALL, RotoRob, Transactional analysis. You can follow any responses to this entry through the RSS 2.0 feed. You can leave a response, or trackback from your own site.