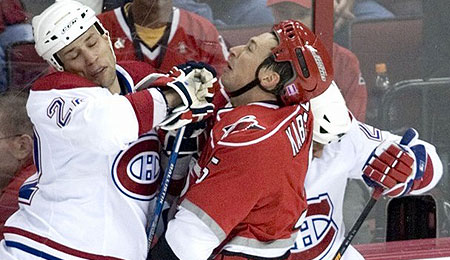 Frantisek Kaberle, who stayed healthy enough to reach 80 games for the first time in his career this season, has finally succumbed to another injury.

He’ll undergo right shoulder surgery Wednesday, a procedure that will sideline the veteran defenseman for two-to-four weeks and force him out of next month’s World Hockey Championships.

Guess you can scratch the Czech’s name off your draft list for that event.

Kaberle had reconstructive surgery on this same shoulder prior to the 2006-07 season – an operation that caused him to miss most of the schedule. This procedure is minor in comparison, so he’ll be fine by training camp next fall.

Although he failed to bulge the twine for the first time in his career, Kaberle had been gaining a bit of steam down the stretch, picking up four assists in his final nine games, which included the season finale in which he was benched after playing just 3:44. All told, Kaberle had two of his three multi-point efforts in the season’s final month, making him a decent waiver wire pickup as the season waned.

Of course, that wasn’t enough to help Carolina avoid the dubious distinction of becoming the first team in NHL history to miss the playoffs two straight seasons after winning the Stanley Cup, as it did in 2006.

The team actually posted a four-point improvement over last year’s showing, but that might not be enough to save coach Peter Laviolette’s job.

By RotoRob
This entry was posted on Tuesday, April 8th, 2008 at 6:13 pm and is filed under HOCKEY, Injuries, RotoRob. You can follow any responses to this entry through the RSS 2.0 feed. You can leave a response, or trackback from your own site.