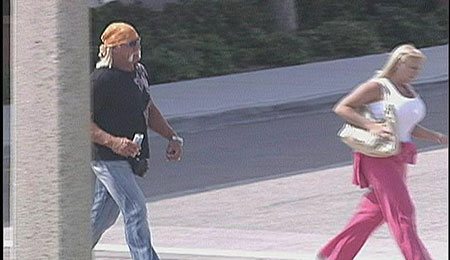 I’m not feeling the love between Hulk and Linda Hogan these days.

Apparently, the easiest way to bag yourself a Cosmopolitan Fun Fearless Male Award is to bag Jessica Simpson.

This year, three more Simpson lovers – past and present – were honoured by the mag. John Mayer took home the Fun Fearless Male of the Year Award, while Dane Cook and Simpson’s current beau, Tony Romo, also both won awards.

Okay, lest you think only Simpson conquests win these things, that’s not the case, but clearly, those that have carnal knowledge of her are shoo-ins for this honour.

I get the Fearless part – you’ve got to have balls of steel to deal with her, but Fun? What’s fun about having your life become tabloid fodder? Okay, don’t answer that.

In other Simpson news (ugh, I know, I can’t stand it anymore, either), it’s been revealed that she has major issues with insomnia and can apparently only sleep at night if she lies on the floor.

Uh, you got that right.

Simpson often has to leave Romo alone in their bed of bliss while she sleeps on the floor. What? Isn’t that Dallas Cowboys’ comforter cozy enough for you?

Anyways, is it just me or doesn’t she realize that it’s no accident she’s winding up on the floor each morning? Hey, she can pretend that she’s making the conscious decision to leave bed and lie on the floor, but let’s get real here. Tony – no doubt channeling his inner punter – has nothing to do with this? Riiiiiiiigggghhht.

In other matters, I am sick of writing about these two, but hey, they are the hot athlete-celeb couple now. Believe me, I search high and low for anything I can write about other than this pair, but there’s just nothing out there now. If you’ve had it with this couple as well, feel free to send me your celebrity-athlete news tips.

Things are getting ugly between Linda and Hulk Hogan, embroiled in a bitter divorce. According to legal documents obtained by TMZ.com, Linda is claiming that Hulk is using their son Nick to deliver messages related to the divorce. She also charges the wrestler with telling the kid secrets that he didn’t want Linda to be aware of.

Linda is asking the courts to order Hulk to stop talking to Nick about the divorce.

Ah, I feel the love.

By RotoRob
Tags: Mikko Koivu
This entry was posted on Sunday, March 9th, 2008 at 4:53 pm and is filed under RotoRob, Squeeze Play. You can follow any responses to this entry through the RSS 2.0 feed. You can skip to the end and leave a response. Pinging is currently not allowed.