The Bench Warmer: Collin(s) all ‘Canes 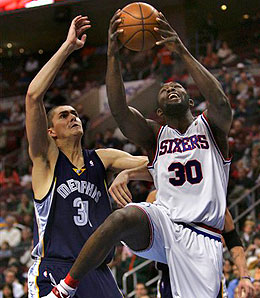 Reggie Evans, right, could be in jeopardy of losing his “The Collector” nickname if Dwayne Collins makes it to the NBA. (AP Photo/Rusty Kennedy)

The University of Miami (Florida) has always been known as a football powerhouse. The Hurricanes have rarely been known as a threat in basketball in the tough ACC, but after last week’s upset over Duke, maybe it is time to start recognizing their hoops program.

The ‘Canes were led by sophomore forward Dwayne Collins, who poured in a season best 26 points on 12-of-14 shooting from the field and 2-of-3 from the line, while pitching in with seven boards. Collins followed up his performance in the upset over Duke with a solid game of 12 points and six rebounds helping Miami beat Maryland to extent its ACC winning streak to four games. Collins stands at 6’8″ and weighs in at 232 pounds which is the perfect size for a college forward, and he has made it pay off in only his second year, averaging 9.6 points and 6.3 boards a game.

While Collins will need more time to develop in the college ranks, the Miami native already has the body and with improved skills, can be an effective bruiser in the NBA ranks. Think Reggie Evans but with a better scoring touch. Will Collins make it to the NBA and steal “The Collector” nickname from Evans? That would not be a stretch.

I was going to ask how anyone could argue that the team was Tennessee, but now I think it should just be the state of Tennessee.

Formerly the No. 2 team in the nation, the University of Tennessee came into the FedEx Forum and upset the number one-ranked Memphis Tigers last Saturday. Not only did that lock the school in as the best team in the state of Tennessee, but it will almost assuredly give the Vols a No. 1 seed in the tournament.

Tyler Smith led the Volunteers with 16 points, six rebounds and three assists, continuing his season-long scoring barrage. The 6’7″ forward is currently averaging 13.5 points and grabbing 6.7 boards a game in the tough SEC. The senior leader, Chris Lofton, had an off game, going just 2-for-11 from the field and only contributing seven points, but don’t expect that to hurt his stock come NBA draft time.

But wait…last night, No. 14 Vanderbilt, behind Sean Foster, upset the new No. 1 Tennessee. So that being said, the team of the week is….the state of Tennessee? The union’s 16th state is currently taking a back seat to no one on the hardwood.

This game will help determine who will challenge Georgetown and Roy Hibbert for the Big East title. Notre Dame is currently ranked 17th and is led by McAlarney while Louisville sits just behind the Irish in the 18th slot in the country. The return of Cardinals’ centre David Padgett has been huge as Louisville has gone 13-3 since he’s come back. Watch this game not only to see the jockeying for position in the Big East, but also for a sneak peak at some future NBA players.

By Daniel Olson
This entry was posted on Wednesday, February 27th, 2008 at 3:10 pm and is filed under BASKETBALL, College sports, Daniel Olson, The Bench Warmer. You can follow any responses to this entry through the RSS 2.0 feed. You can leave a response, or trackback from your own site.