The Bench Warmer: Lofton’ Up Threes 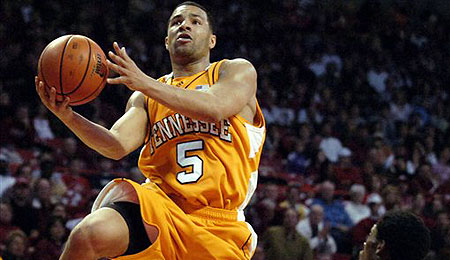 Chris Lofton has the Volunteers shooting up the rankings.

Maybe he is playing with a chip on his shoulder over his exclusion from the final roster for this past summer’s Pan-Am games. Maybe he’s just being a senior leader. Whatever he’s doing, Chris Lofton is stepping up at the right time for the Tennessee Volunteers.

The 6’2″ guard from Kentucky is playing a huge role for Tennessee, leading it to a number seven ranking in the nation. Tennessee also currently only sits a half game behind Florida, the reigning national champions, in the East division of the SEC. Over his last two games, a pivotal loss to Kentucky and a key win over Georgia, Lofton has lit it up. He scored 22 and 27 points respectively, while shooting just over 50 per cent from downtown at 12-for-23. Overall, he is 16-for-31 from the field in his last two games.

Lofton is your prototypical, stretch-the-defense type of guard who has a great chance of significantly aiding an NBA team in need of an outside presence. Look for him to be a mid- to late-first round pick come draft time.

Ladies and Gentleman, it’s the Connecticut Huskies! A team that had two of its guards suspended before its matchup with Indiana, one being its starter and second leading scorer, has still managed to win its last four games. Coach Jim Calhoun called his win over No. 11 Indiana this past Saturday one the most satisfying wins of his career, probably because his starting guard was handed a team imposed suspension, as well as his backup (sophomores Jerome Dyson and Doug Wiggins). At 15-5 overall and 5-3 in conference, the Huskies currently sit at third in the Big East.

They are a team who shares the spotlight, with five players averaging double figure points per game. Their best prospect might be forward Jeff Adrien, who at 6’7″ is averaging 14.1 points and 9.2 boards per game while also putting up a block per contest. Adrien could make a useful big man off the bench for any prospective NBA squad if he decides go pro after this, his junior year.

If the UConn Huskies continue their hot streak, and get their two guards back, look for them to continue to contend in the Big East and potentially make a deep tournament run.

The No. 2 team in the land, Kansas, travels to Manhattan to take on in-state rival Kansas State and freshman phenom Michael Beasley. Both teams currently sit at 4-0 in the Big 12, so not only is this a rival game, but a battle for first place in the conference. The cameras will all be on Beasley, who faces his toughest test of the season.

By Daniel Olson
This entry was posted on Wednesday, January 30th, 2008 at 2:23 pm and is filed under BASKETBALL, Daniel Olson, The Bench Warmer. You can follow any responses to this entry through the RSS 2.0 feed. You can leave a response, or trackback from your own site.