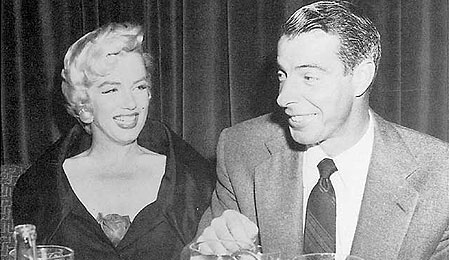 Back in the day, Marilyn Monroe and Joe DiMaggio were pioneers in the world of celebrity-athlete pairings.

Welcome to Squeeze Play, our newest feature on RotoRob, where we bring you the latest dirt about which celebrities are being spotted with which athletes; which QB is porking the CB (cute blonde); which All-Star is having a little starlet sandwich on the side; and which right winger is taking a sweet, young model under his wing.

Celebrities hooking up with athletes is now an accepted, age-old tradition, probably first ushered in during the 1950s when Joe DiMaggio won the heart of timeless sex symbol Marilyn Monroe. Since then, we’ve seen an endless stream of sports figures dating/marrying/doing the mummy and daddy dance with the world’s top models, actresses and musicians. In Squeeze Play, we’ll talk about some of the classic relationships over the years, and open the kimono on the most recent scuttlebutt in the world of celebrity dating.

By now, we’ve had it up to here reading about how Jessica Simpson single-handedly destroyed the Cowboys’ season by her mere presence at the games. Given extra time off because Dallas was the NFC’s top seed, quarterback Tony Romo opted to whisk his gal-pal Simpson away for a mini-vacation in Cabo San Lucas in Mexico while his teammates were using the time as a team-building and bonding period before their playoff date against the Giants last weekend.

While Romo didn’t absolutely suck Sunday against the New York, with just 18-of-36 passes completed and one TD against one INT, he wasn’t good enough to stop the ‘Boys from a second straight early playoff exit. (Well, at least he didn’t fumble the game away like he did last year.) And given that Dallas was expected to come out of the NFC as champions and looked like a strong bet to take it all this year, it’s a bitter pill to swallow once again.

It’s been revealed that Romo was dealing with a thumb injury that caused swelling for much of the game. Apparently, he hurt it on just his second throw of the game, but come on, let’s get real here. Just where was Romo sticking his thumb in the days leading up to this critical match? Jessica? Any comment on that?

You may recall that in late 2006, he took up with former American Idol winner Carrie Underwood. Anybody think Romo was better off with Underwood? The stats seem to suggest so. Romo was having a fantastic season this year until Simpson started showing up on the Jumbotron a bit too often.

Alright, enough about how Simpson destroyed Dallas’ hopes for a Super Bowl.

Let’s move on to some classic athlete-celebrity gossip and discuss the king of all such endevours – Derek Jeter. Over his stellar career, Jeter has been linked to such hotties as Mariah Carey, Jessica Alba, Vanessa Minnillo, Jessica Biel, Lara Dutta, Jordana Brewster, Cassia Riley, Joy Enriquez (who he stole from A-Rod, by the way) and Scarlett Johansson. Phew…my wrists are hurting after typing that list. Did I leave anyone out?

Jeez, ‘The Captain’ sure knows how to make the rounds. Let’s see, he’s been with a Miss Universe, a pop diva, a couple of actresses, an MTV VJ (and former Miss Teen USA), a Playboy Pet of the Year runner-up, and the two Jessicas (well, the two that really matter, with apologies to the aforementioned Ms. Simpson and of course, the lovely Ms. Tandy, circa 1940). I think we’re going to need an extra scorecard to track this dude’s sexsploits.

By RotoRob
Tags: Mikko Koivu
This entry was posted on Saturday, January 19th, 2008 at 5:05 pm and is filed under RotoRob, Squeeze Play. You can follow any responses to this entry through the RSS 2.0 feed. Both comments and pings are currently closed.