Bulls’ Mini Streak is Over 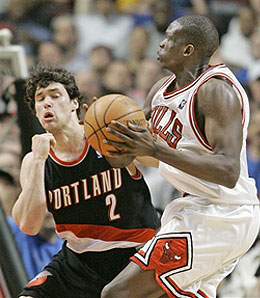 If Luol Deng, right, adds an outside game, he’ll be even deadlier. (AP Photo/M. Spencer Green)

Well, at least they finally managed to win consecutive games, but the Chicago Bulls couldn’t make it ” gasp ” three in a row Monday night, when they went down to the powerful Mavericks.

On the plus side, a late rally made things moderately interesting, and the Bulls’ moribund offense continues to show signs of life. Still dead last in the NBA with just 89.1 PPG, at least Chicago managed 90 points in the win over Atlanta and then a veritable bonanza with 111 vs. Charlotte (who can’t stop anyone

By RotoRob
Tags: Chicago Bulls
This entry was posted on Tuesday, December 4th, 2007 at 5:11 pm and is filed under BASKETBALL, RotoRob, Team report. You can follow any responses to this entry through the RSS 2.0 feed. Both comments and pings are currently closed.