It’s Never to Early for a Good Draft 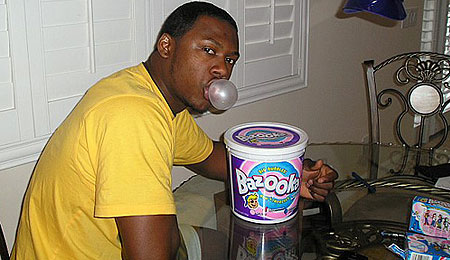 The system autopicked Hanley Ramirez at No. 3 for Tim, but we doubt it blows up his face.

It’s been a while since I checked in, but the vacation’s over and it’s time to get back to the business that is always at hand — baseball.

First off, let me pass on my congratulations to the Chunichi Dragons on their recent Japan Series triumph. History was made as Daisuke Yamai and Hitoki Iwase combined on a perfect game to wrap up the series four games to one, ending the Dragons’ 53-year drought. It’s a shame most of the mainstream American media missed this historic event, but with the semi-finals of the Celebrity Lawn Dart Championships running at the same time, it’s most understandable. I sense some future venting material coming up here.

Baseball in my world is an ever-evolving and constant project. As one season ends, another starts and this fall has been no different. My NPB research picks up as we near Fantasy Guide time; my keeper league, the NABL, is currently in the midst of a fall dispersal draft, and I’m also working on a research project, attempting to sort through the many mysteries of the large format league. Here at RotoRob.com, I’m currently working on a series of articles that will be rolled out over the next several months dealing with draft preparation. At the same time, we’ll, of course, be taking a pre-season look at the rankings by position.

This past week, I had the privilege of partaking in my first draft of the 2008 season, the annual Creativesports.com mock draft. Curated by Lawr Michaels and hosted by Geoff Stein over at Mock Draft Central, this is a 15-team, mixed, 5X5 draft and hold, snake draft.

I’m a big proponent of doing the homework, but in this case with just a couple of days’ notice, that pretty much went by the wayside. I received my slot the day before the draft and ended up with the No. 3 pick. Being a draft and hold, my first thought was let’s get those stolen bases out of the way pronto. So I deciding to go with the old approach of buy the steals early, work on my starting pitching mid to late rounds, look for bargains in players coming off down years and attempt to vulture my saves at the end.

So there we were on a cold snowy mid-November evening (at least where I was), 15 guys attempting to unveil the secrets to 2008 — a challenging task, to say the least.

When the third pick came up, I was left flipping a coin between Hanley Ramirez and Jose Reyes, and we were off.

Immediately, my computer moved into cranky mode and a switch to auto made me the proud owner of Ramirez. Not the choice I wanted, but certainly one I was more than happy to live with. With 24 picks before my next kick at the can, normally I’d be queuing up players left, right and centre for future reference. But having been through many drafts and with a cranky computer, I had to steer clear of this tactic. The thought of seeing one of my end plays turning up in the third round did absolutely nothing for me.

After the first round, which saw very few surprises, I happened to glance at pitching and, lo and behold, Johan Santana was still out there — my first clue as to what would be occurring just around the corner. What is happening? Isn’t Santana a top 10 player, or at least first round pick? Heading back down the old ladder, he was still there. Is this just a five-category league?

The old ticker started picking up just a bit as more picks followed and still no one grabbed pitching! Now what do I do if he’s still there at my pick? But ah ” finally — with the 22nd pick, the suspense was over. This was the first big surprise of the evening.

Time for that second pick and with Chone Figgins being out there, I grabbed him and my speed was a done deal. A couple of quick picks later and then it was back to me for Round Three. Being a 15-team league, with two catchers required, it was time to take care of that position, so I wisely grabbed Victor Martinez.

Again, I had the long wait and with my Round Four pick, took Nick Markakis. I like this kid, and after coming off a solid year, the potential upside is there.

That brought us to Round Five, and time to gamble, so I grabbed Vernon Wells. Last year, in most leagues, Vernon was a solid Round Two pick, and with a healthy shoulder heading into the spring, I’m counting on a bounce back to the 2005-06 level, making this both a decent gamble and potential big bonus.

Again I had that 22 pick wait and I took the time to start perusing rosters to see if anything jumped out at me. Did it ever! With five rounds now complete, eight teams had no pitching at all and nine teams had no starting pitching. My original plan was to look late for pitching, building an offense first, but with this many teams laying off the pitching, I decided it was time to change horses mid-stream.

I just didn’t like the odds of going head to head with more than half the league in an attempt to build a rotation. Round Six saw me grab Dice-K, and coming back around the bend I grabbed Roy Oswalt in Round Seven. Dice probably went a bit early, but that NPB bias of mine kicked in and I just couldn’t say no. I really like Oswalt with the 93rd pick.

Okay, the pitching has a base, so let’s get back to a bit more offense, I figured. My next two picks were Mike Lowell and Josh Willingham, both solid if unspectacular.

Reviewing those Round Six through to Round 10 picks, 36 of the 75 selections were pitchers, with relief pitchers being snatched up in a big way. Looks like that end game play on the bullpen is going to be a gamble, and it was. Round 10 found me looking at adding to that rotation and I really like what I found. Matt Cain was out there and the combination of ERA, WHIP and Ks was just too hard to turn down. If that ugly 2007 won/loss record drives him down too far, he could most certainly be a very nice bargain in 2008, I believe.

Round 11 saw me fill out my middle infield with Khalil Greene. I like the power potential here, but the BA could take a hit. One of my pre-draft targets was next on the list and Joey Votto, grabbed in Round 12, was now mine. Let’s just hope that Dusty Baker takes notice of that very solid September, as the power/speed combination is very real.

Since that first problem back in Round One, my computer had been performing as it should so I took the chance on queuing up a couple players for later perusal. Thank goodness it was just a couple as the good times were just about to roll. Round 13 saw me take Kaz Matsui, filling out my middle infield.

My team was probably a bit top heavy now on the SBs, but a decent average, runs scored and 30+ SB was too enticing for me to pass on at this stage.

Next up, with relief pitchers falling all over the place, it was time to grab some saves, so I took Todd Jones. With the Joel Zumaya injury, Jones should be guaranteed some decent save numbers for 2008, and it saved me from picking Joe Borowski.

Then, I went back to starting pitcher and took the sure and steady route by grabbing Derek Lowe, followed by another long shot in Franklin Gutierrez. If Gutierrez gets the ABs, he could be a nice grab at this stage.

In Round 17, and with my corner infield still vacant, I went with Eric Chavez. How the mighty have tumbled! If there is some semblance of health, there is at least potential for decent numbers here. A long shot, maybe, but we are nearing the end and it’s time to reach.

With my Round 18 pick nearing,

By Tim McLeod
This entry was posted on Monday, November 19th, 2007 at 3:14 pm and is filed under BASEBALL, Draft strategy, Mock drafts, Tim McLeod. You can follow any responses to this entry through the RSS 2.0 feed. You can leave a response, or trackback from your own site.