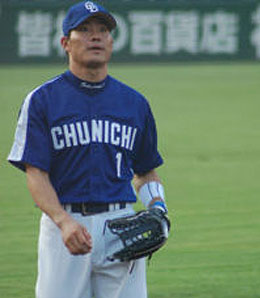 An injury has left Kosuke Fukudome’s ability to come to the majors in 2008 in doubt.

Today we’ve got a mishmash of material to report, including some notes from Japan and Independent Ball.

Fukudome was deactivated by the Chunichi Dragons a couple of weeks ago because of an elbow injury he suffered last month.

Apparently, Tim reports, there’s a rumor that the two-time batting champion is headed to the U.S. this week for further medical evaluation. It’s unclear why he’d need to travel to the U.S. to have his elbow looked at.

Fukudome, a member of the Japanese team that won the first WBC last year, wasn’t in the starting lineup for three straight games because of this problem prior to the all-star break starting July 16.

The team has not offered any more details about Fukudome’s injury other than to say surgery was not a possibility. I suppose that’s good news.

But for those who have drafted him in keeper leagues, this is a potentially disastrous situation if you were banking on him being a major leaguer in 2008. Fukudome, batting .294 in 81 games this season, would have met the free agent requirements on August 21, but now we’ll need to monitor the situation to see if he’ll still qualify this year or not.

Former Met pitching prospect Harold Eckert has resurfaced with the Newark Bears of the Independent Atlantic League. As a New Jersey native, Eckert gets to try to revitalize his flagging professional career at home with the first half North Division Champions. The righty, who turned 30 last month, was a 19th rounder by the Dodgers back in 1999, but control problems that have plagued him in recent years were ultimately his undoing after a seven-year career in organized ball.

Eckert never pitched for the Dodgers organization originally. After signing his first pro contract in June 1999, the deal was voided in September before he ever appeared in game for the system. The Mets signed him after the 2000 season and he finally made his debut the following year.

In 2001, Eckert looked like he had promise, pacing the NYPL in wins (nine) and ranking fifth in strikeouts with 75. He followed that up the next year at Low-A Columbia with a career-best 13 wins (good for third in the Sally League) and career-bests with 22 starts, 139 1/3 innings and 149 strikeouts (the latter figure good for fourth in the league).

In 2003, he advanced to High-A and pitched well, but was limited by injuries.

Prior to the 2004 season – ironically enough – Eckert was dealt back to the Dodgers and he progressed to Triple-A by the end of that season, spending three and a half years at that level before the Dodgers released him last month. He has never appeared in a major league game.

After spending most of the season as a reliever for Triple-A Las Vegas, Eckert is back to starting with the Bears and he’s done quite well so far (1-0, 3.00 in three starts), most promisingly showing improvements in his control with just five walks in 18 IP to go along with 23 Ks.

To make room for Eckert, the Bears placed another blast from the past on the DL – RHP Travis Phelps. Originally an 89th round pick by Tampa Bay back in 1996, Phelps has been in professional baseball for 11 years, enjoying his finest season with the Rays in 2001 when he spent a portion of the year as the closer.

Phelps, who also turned 30 last month, has pitched 79 games in the majors, last appearing in the Show in 2004 with Milwaukee, and he’s also pitched in the Braves’, Reds’, Cubs’ and Astros’ systems.

This is his second go-round in the Atlantic League, having pitched a couple of games for Camden last year. This season, Phelps has performed a variety of roles, starting two of the 10 games he’s appeared in while also earning two saves. He’s currently 0-2 with a 5.24 ERA, thanks mostly to major long ball problems (five allowed in just 22 1/3 innings). Don’t be looking for an invitation back to organized ball for Phelps anytime soon.

By RotoRob
This entry was posted on Wednesday, August 8th, 2007 at 7:02 pm and is filed under BASEBALL, Fantasy Notes, Ice Chips, Independent leagues, Japanese baseball. You can follow any responses to this entry through the RSS 2.0 feed. You can skip to the end and leave a response. Pinging is currently not allowed.