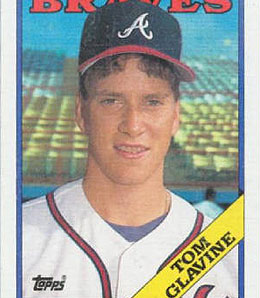 Now that he’s a 300-game winner, perhaps our Tom Glavine rookie cards will appreciate in value.

It was quite a weekend for long-awaited milestones, wasn’t it? First we had A-Rod’s 500th homer then Barry Bonds’ 755th home run and finally – on the Sunday Night Game, no less – Tom Glavine joined the coveted 300-win club.

Glavine is the 23rd pitcher in major league history to reach the mark, and – ironically – the first to make it since ex-teammate Greg Maddux arrived there back in 2004.

It’s a fantastic achievement for a hurler who has survived several false alarms that his career was nearing an end. What I find most compelling about Glavine’s career – and the main reason I consider him the preeminent lefty of our generation (assuming you view Randy Johnson as more of a power pitcher) – is his ability to make adjustments.

For instance, Glavine spent years living on his ability to nibble away at the outside corner before a redefinition of the strike zone forced him to come inside on hitters, something most analysts expected to be his undoing. Well, he’s still going strong (last night’s win gave him 10 victories to move into 12th place in the NL; it also marked the 18th time he’s reached double digits in wins).

Glavine’s ability to change speeds and keep opposing hitters off balance has been truly masterful over the years. As a measure of the respect he’s earned in his career, he left his outing after 6 1/3 innings and 102 pitches last night to a standing ovation from the crowd — at Wrigley Field.

Glavine left with a 5-1 lead and a runner at second, and then had to watch while the bullpen (yes, the same bullpen that blew a win for him in his last start) allowed the Cubs to pull within 5-3, putting his victory in danger. The Mets restored their big lead, however, and came through with an 8-3 win, giving Glavine his milestone at last.

The man is now 17 days shy of being 20 years removed from his first major league win with the Braves and now he’s made it to a plateau that very conceivably may never be reached again. Yes, the Unit is close with 284, but he’s almost 44 and his back is proving to be chronic.

Clearly, Glavine’s Hall of Fame resume is complete: five 20-win seasons; two NL Cy Young Awards (1991 and 1998); 10 All-Star appearances; and a World Series MVP performance in 1995. We could never imagine him as anything but a Brave, yet he’s now been with the Mets for five years.

It took Glavine two tries to reach 300, but don’t blame him. He gave up only two hits and a run over six innings on Tuesday in Milwaukee, but didn’t factor into the decision after the pen let his lead slip away. In fact, since getting shelled on July 19, Glavine has been splendid, giving up just 16 hits and six runs over 18 1/3 innings. Even at the age of 41, he bears no resemblance to a man who is hanging on.

He’s the forth Met to be a 300-game winner, but is the first to actually win his 300th while wearing the uniform. Tom Seaver, Nolan Ryan and Warren Spahn all reached the milestone with other teams. More impressively, he’s just the fifth lefty to reach 300. The others: Spahn, Steve Carlton, Eddie Plank and Lefty Grove.

As he has so often done over his career (and given his .244 mark this season, he’s still doing pretty damn well), Glavine helped himself with the stick last night. He drove in the first run of the game with a single and then helped produce a second run in the sixth, when his groundout moved up a runner from second to third.

By RotoRob
This entry was posted on Monday, August 6th, 2007 at 12:53 pm and is filed under BASEBALL. You can follow any responses to this entry through the RSS 2.0 feed. You can leave a response, or trackback from your own site.