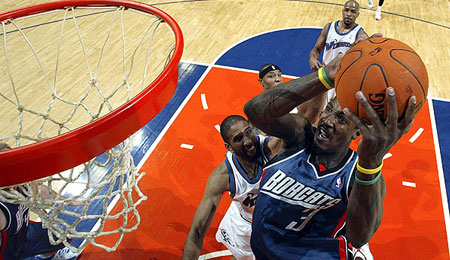 Re-signing Gerald Wallace proves the ‘Cats are serious about making a run for the playoffs next season.

So I guess when Michael Jordan said that the Bobcats would spend some money this summer, he wasn’t kidding.

With the team’s top scorer last season back in the fold and draft day trade acquisition Jason Richardson aboard, suddenly the Bobcats are looking like a playoff contender.

Retaining Wallace was repeatedly talked about as one of the team’s top priorities, but no one expected it to be easy. Or cheap.

In fact, it took $57 million over six years to make it happen. Of course, with that kind of coin being floated around, it was small wonder that Crash remained on the market for such a short period of time.

It was believed that Wallace wanted to return all along. (According to the Charlotte Observer, he stayed in contact with the team, sending text messages to a team official to find out how the club was doing in Summer League.)

Detroit was apparently interested in him, but with Tayshaun Prince already entrenched at the three and the Pistons unable to offer him more money than he was currently making, that wouldn’t have made much sense. Dallas was also said to be exploring a sign-and-trade possibility (even though it has Josh Howard at the SF spot), but that plan never hatched. Orlando, Milwaukee, the Heat, Portland and the Warriors were also interested in Crash. But Charlotte had cap space and a starting job for him, and that won out in the end. Now, Wallace has a salary similar to both Prince and J-Ho.

Of course, when the Bobcats proved their intentions by landing J-Rich in a draft-night shocker, that had to send a very positive message to Crash.

With two legitimate scorers in tow now, the ‘Cats have taken a major step forward in a conference where baby steps can have you leaping over several teams. Now ff Sean May can only stay healthy, .500 could be a possibility.

The Cats also re-signed guard Matt Carroll (pending the completion of some paperwork), giving him $27 million over six years (a bit steep for a guy who will be coming off the bench, mind you). They’ve penned first rounder Jared Dudley (who is looking good in Summer League) to a deal and exercised their options on both Walter Herrmann and Ryan Hollins. There was even a rumor that Charlotte was going to make a run at Darko Milicic, but he landed in Memphis.

There is still some paperwork to finalize with the Wallace deal, but the two sides have agreed in principle. With an average annual salary of $9.5 million under his new contract, Crash gets a nice raise over the $5.5 million he earned last year and the $6 million he was in line to make this season before opting out to become an UFA. He can also earn as much as $2 million each season in bonuses. The final year of the new contract is optional for Wallace.

With the Wallace situation resolved, the free agent class of 2007 is quickly disappearing. Rashard Lewis is on the move to the Magic; Chauncey Billups is back with Detroit and Vince Carter has re-signed with the Nets; Devean George is staying with the Mavs and Grant Hill will play in Phoenix. Mo Williams is the now the best player still on the market, but it appears he’ll re-sign with Milwaukee.

Back in Charlotte, this team is looking like it’s headed in the right direction. J-Rich, Crash, Emeka Okafor and Raymond Felton could very well be a strong enough foursome to help earn the ‘Cats – entering year four — their first playoff berth. Felton has a glorious opportunity to take a big step forward, quarterbacking what should be a more up-tempo offense with Wallace and Richardson running the floor.

As mentioned, if May can make it through even half a season, it will really help. That might be asking for a bit too much though, as incessant injuries have cast doubts about his ability to log serious PT.

Returning the former Crimson Tide Wallace to the fold was the key. Sure, the 18.1 PPG he put up last year is sweet. But what really gets fantasy owners frothing are the steals and blocks. In 2005-06, he became the first player in 14 years to average better than two per game in each category, finishing first in the NBA in steals and just outside the top 10 in blocks. While his numbers slipped last year, Wallace still finished tied for fourth in steals and in the top 35 in blocks.

Next on the docket for the ‘Cats is an extension for Okafor. He’s still working on his rookie contract and the team has until Halloween to extend that deal. Charlotte would be wise to lock up its top rebounder and one of the top shot blockers in the NBA.

Back-up centre Jake Voskuhl has opted out and the team needs to decide what to do about him, plus they’ll need a new back-up point guard after waiving Brevin Knight.

By RotoRob
This entry was posted on Thursday, July 12th, 2007 at 12:48 pm and is filed under BASKETBALL, Transactional analysis. You can follow any responses to this entry through the RSS 2.0 feed. You can leave a response, or trackback from your own site.