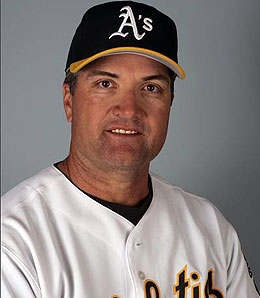 It may take more than “positive reinforcement” for Bob Geren to get the A’s back to the playoffs this season.

The Oakland A’s offense ‘ among the weaker attacks in the American League all season, but particularly putrid during the team’s season-worst five-game losing streak ‘ awoke Wednesday night.

And when I say it woke up, I’m talking about a dozen espressos worth.

Nine runs over the first two innings and a season-high tying 18-hit attack en route to a 13-7 plastering of the Tribe ‘ the team Oakland is chasing for the Wild Card ‘ was just what the doctor ordered. Or, it was at least what first-year manager Bob Geren was hoping for in his pre-game chat in which he used ‘positive reinforcement’ (coach-speak for he didn’t slam anyone against the wall) to try to get his club going.

The A’s sure needed that. A year ago, they were in first place in the AL West by a game and a half, en route to a 93-win season and their fourth division title since 2000. Flash forward to this season and Oakland’s losing streak, combined with Seattle’s recent hot play, has the A’s sitting in third place in the West ‘ eight games out. They’re on pace for just 84 wins ‘ and that is not going to be good enough to get back to the postseason.

Oakland has been on a remarkable run the past decade. Throw in the wild card finish in 2001 and we’re talking five trips to the playoffs in the past seven years. In fact, the A’s haven’t finished lower than second in the AL West since winning just 74 games in 1998.

But a middling offense and plenty of injuries to the pitching staff ‘ especially the back end of the bullpen ‘ have conspired to make Geren’s first season at the helm a difficult one. Oakland struggled out the gates with a 4-6 start, but a 33-23 run put it at 37-29 on June 15 prior to the losing streak. Currently 40-38, for the most part, this has been a team hovering around the .500 mark all year, with very few streaks to speak of, one way or the other.

It’s going to take one of the club’s near-legendary huge second halves to cut the deficit and get back in the playoff picture. For instance, the A’s have to go 53-31 from here on out to match last year’s record.

But here’s the good news — help is on the way. Among the infirmed who are on the comeback trail:

All the injuries have forced the A’s to add bullpen reinforcements. They sent a PTBNL to Washington for Jermaine Van Buren, a tremendous Triple-A reliever who provides depth to the system, but tends to be less than tremendous as a major leaguer. Let’s hope Oakland doesn’t need him. The A’s have also recalled reliever Ruddy Lugo and starter Dallas Braden (who is working out of the pen). Rookie Santiago Casilla, brought up earlier this month, has been superb, giving up just one earned run in 15 2/3 innings.

Getting that bullpen back to full strength is the key here. While Alan Embree had been doing a decent job in the absence of Street, he’s been shelled in his last two outings -‘ including a total meltdown Tuesday that allowed Cleveland to put up five runs in the ninth for a massive comeback win. If Harden can prove he’s capable of stringing appearances together without falling apart, the closer job could be his until Street returns.

Beyond the pen, as discussed, the offense is the other big issue. There are just too many underperforming sticks in this lineup, especially during the five-game losing streak when Oakland managed just 10 runs in total. This team is eighth in the AL in OBP ‘ always a franchise trait under the Billy Beane watch ‘ but is just 13th in BA and runs. Pitching (they lead the AL in ERA, BAA, OPS and WHIP) has kept the A’s afloat.

Here’s a scary thought: where would be the A’s be without perennial Quad-A player Jack Cust? After driving in a career-high five Wednesday, he’s up to 26 runs and 34 RBI in 44 games. He’s homered in back-to-back games and is really feeding off Indians pitching, batting .409 with five homers and 15 RBI in just 19 at-bats against the Tribe. It took an injury to Piazza to make it happen, but long-time prospect Cust has finally delivered with a breakthrough season.

However, other bats have struggled:

On the plus side:

A win this afternoon would have given Oakland a much-needed split against Cleveland, an impressive feat considering the Indians took the first two games of the series and are among the best home teams in baseball. Unfortunately, the bullpen squandered an early 3-+0 lead, allowing Cleveland to win 4-3. Next up, the A’s head to New York for three tough games against the Yankees, hungry to snap a recent slump. Then Oakland heads home to play Toronto followed by what’s shaping up to be an important series against Seattle in the fight for second place in the AL West. If the A’s slip any further away by the time this stretch is played out, it may be time to think about retooling.

Following their first trip to the ALCS since 1992 last year (in which they were promptly swept by the Tigers), Oakland needs to not only get its bullpen back in functional order but also beef up its attack if it hopes to get back there this season and actually have a fighting chance to represent the AL in the World Series. It may be asking a bit too much, even for a team prone to second-half miracles.

By RotoRob
This entry was posted on Thursday, June 28th, 2007 at 3:55 pm and is filed under BASEBALL, RotoRob, Team report. You can follow any responses to this entry through the RSS 2.0 feed. You can leave a response, or trackback from your own site.